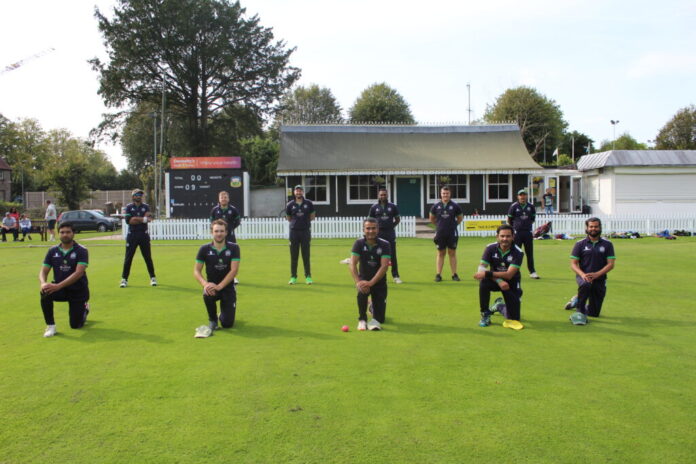 IT was the icing on a rather delicious cake for Limerick’s season on Saturday when they saw off their final opponents of the year, Cork County, in their own back yard to end the season on a high bringing the tally of trophies to 5 (out of a possible 8). Few had thought of this kind of possibility at the start of the year.

Limerick made four changes to the team who beat Cork Harlequins in the semi-final; Victor Van Der Schyff and Saurabh Teke came in to boost the middle order along with medium-pacer John Daly whilst Zubair Rehman came in to take the gloves.

Skipper Mohamed Gouse wisely took the decision to once again bat first and let the home side do the chasing. The in-form Sarfraz Ramay opened the batting with Tim Smithies and two settled Limerick into the game nicely.

Swaroop Burra came in at 3 to add much needed 20 to the total before Cork County began to pile the pressure on. Limerick went from 65-1 to 76-5 in just two overs with rebuilding to be done in the latter part of the innings.

Van Der Schyff and Teke put on a much-needed partnership of 25 runs to get Limerick over the 100 mark before Shani Alam and Asif Shahab kept the scoreboard ticking over at the rear end of the Limerick innings, 24 runs off the last over was a gift for Limerick who were subsequently able to bring their total up to a respectable score of 135-8 and making a very a demanding run chase.

County settled into the game well and despite losing two early wickets to the bowling of Asif Shahab, were able to restore some impetuous into their chase as they made it to 10 overs with the loss of still only two wickets.

However, to Limerick’s advantage, the run rate was beginning to creep up and despite having wickets in hand, County weren’t able to relieve themselves from the strain the Limerick bowlers had on; spinners Smithies and Ramay picking up two and three wickets respectively as County tried to hit big and found themselves caught on the boundary on each occasion.

Asif Shahab came back on at the death to make light work of what the opposition had left as County finished all out for 110 in the 19th over as Limerick retained their Junior Blast cup by a margin of 25 runs.

Not only that, the victory also meant Limerick completed the 2020 double at junior level after winning the league just one week ago. The club will know look forward to the MCU Awards night later on in the year to collect the 5 trophies they won this year (Junior and Minor T20 Blast cup & Premier, Division 1 and Division 3 leagues).

As the cricket season came to a close, LCC under-13s played their final intra-club game in Adare. The ground was bathed in warm autumn sunshine setting the scene for a perfect day’s cricket.

For the first time the boys played on a grass wicket and the effort that went into preparing the pitch was rewarded with a hard-fought, competitive match that went down to the wire.

The two teams, captained by Alan and Luke, matched one another with spirit and determination. Alan’s team was put into bat and although the outfield was still damp from overnight dew, the top order readily set about the task of building a substantial score.

By mid-innings bat dominated ball, but as the innings progressed the bowlers took control as the run rate slowed and wickets began to fall. But by the end, Alan’s team had scored 120 runs, setting Luke’s team a challenging target of 121.

Scoring in the second innings started slowly with batsmen finding runs hard to come by and a mid-innings score of 45 did not bode well. Seventy-four runs were required in 10 overs, a required rate of more than a run per ball. But now the lower order began to impose themselves and a number of crisply struck boundaries brought the target within range.

In the final over the batsmen still required 11 to win, 10 to tie and take the match into a super- over. Dots balls, a boundary and a double meant it all hinged on the final ball of the innings: 4 required to tie.

The ball was stuck well but did not reach the boundary. The batsmen took off like racehorses, making one run, then two and then three before turning to run the fourth. A run out as the batsman was one metre short ensured victory for Alan’s team by the narrowest margin.

We were privileged to witness to some excellent cricketing skills and sharpened match awareness. We were treated to sweetly struck boundaries, hard running between wickets, disciplined and accurate bowling, acrobatic catches and sharp run outs.

It was a day of excellent performances. Catch of the day goes to Jake who caught the batsman off his own bowling, taking the ball high and to his right to claim the scalp.

Dan’s opening knock set up the innings for his team before he retired undefeated, while Ayan and Cormac put on a brave batting display for Luke’s team taking their runs aggressively to bring the match to an enthralling conclusion.

As the season closes it is only proper to note the immense effort that all our underage players put into training. Each and every player has developed their cricket skills since we resumed in late July. Their hard work paves the way for a bright future in LCC.

The post Limerick retain Junior T20 Blast to sign off season with another trophy appeared first on Sporting Limerick.