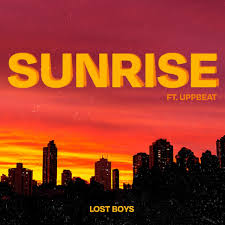 LIMERICK band Lost Boys hit the Number One spot on the release day of their new single now out on the Blindsided label.

New single ‘Sunrise’ features a guest appearance from Irish rapper Uppbeat (who already had a No.1 single this year with DJ John Gibbons with ‘2020’.

‘Sunrise’ is a Summer anthem and its delayed release until this month was deliberate, say the band.

“We initially started writing the song about that summer feeling where you want to run away to the coast with your friends for a weekend.”
“Although it started off like that it grew into so much more when Summer came and no-one was able to do any of those things.”

“That’s why we decided to delay the release.We want people to listen to this driving in the lashing rain with the windows down – if it makes one person feel like they’re sitting at Lahinch with a can in their hand then it was 100% worth making.”

The band made friends and fans at sell-out hometown shows on the back of impressive singles, ‘Obvious’ and ‘Sadie’ which featured on the New Music Friday UK Spotify playlist.