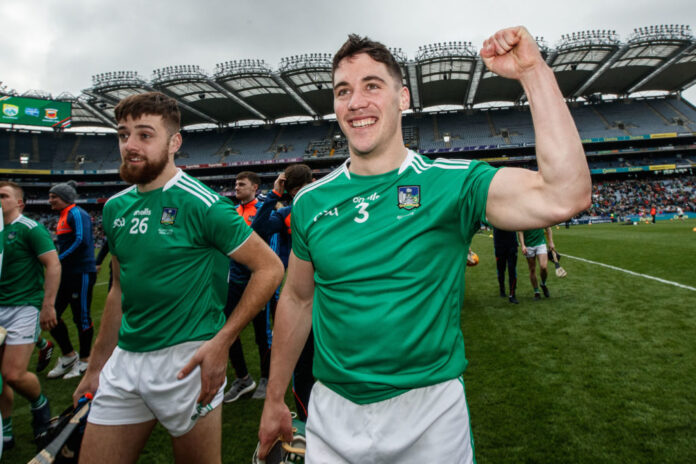 Since the Munster championship clash with Cork in June of 2018, Mike Casey and Richie English have been ever present in the full-back line for Limerick in the championship.

Alongside Sean Finn, the trio are the standout full-back line in the country with each being nominated for an All-Star award, Finn picking up a pair and English awarded one in 2018.

However, it appears John Kiely will have to do without Casey and English for the Munster championship quarter-final with Clare on October 25.

English picked up an ACL injury in February and is still recovering while Casey looks to have suffered a similar fate at the weekend in a challenge game.

As such it is unlikely that either will play a part in this years championship.

With two places up for grabs, who are the frontrunners to make the Limerick XV in the full back line for Clare.

Finn is a guarantees starter for Limerick and arguably the first name on the teamsheet for John Kiely. The best corner back in the country and two time All-Star. He will likely pick up Clare’s leading marksman. Was named man of the match when the sides met in 2019 after taming John Conlon in the LIT Gaelic Grounds.

There is no doubting Finn’s inclusion with the Bruff man able to play at full-back if necessary.

Who will partner him however?

The Kilmallock man was name-checked shortly after Richie English’s injury as the man to replace the Doon starlet. In his second year in the panel, the tidy corner back was impressive for Limerick in the League and is in pole position to take the number 4 jersey.

Tom Condon hasn’t been a championship regular since Casey and English burst onto the scene but the Knockaderry was such a reliable servant in the Limerick rearguard for a large part of the last decade. His experience could be valuable should Limerick pluck for someone else who is relatively inexperienced at this level.

He did start the League opener vs Tipp but in the meantime only managed a substitute appearance against Galway, not making the squad for the last three games.

O’Grady is new to the Limerick Senior set-up having joined the panel for the 2020 season. The Kilteely Dromkeen man was impressive whenever called upon, appearing in each of the Munster league games and making his competitive debut in the National League clash with Westmeath.

Boylan, like those he will be seeking to replace is no stranger to long-term injury but has come back in 2020 having missed last season in its entirety. He starred for Na Piarsaigh as they claimed the Limerick Senior Hurling title with minimal fuss.

A no nonsense cornerback who made his Limerick bow in the Munster League in January. A wildcard to start but is certainly in contention after a stellar club campaign.

Morrissey is a mainstay of John Kiely Limerick sides and that doesn’t look like changing anytime soon. However, the Ahane man could be reverted to the full-back line due to the injuries.

An All Star wing back in 2018, Morrissey did play at full-back in the 2016 Munster semi-final with Tipperary.

On that day, he struggled with Seamus Callanan but Morrissey has grown enormously as a player in the meantime and could plug that gap if called upon.

Barry Nash was played as a corner back in the league this year against Waterford, just 18 months removed from coming on in the All-Ireland semi-final as a corner forward.

Yet, Nash’s move to the back’s has been relatively seamless as he was excellent in the All-Ireland semi-final against Kilkenny last summer when introduced at wing-back at half time.

He has all the talent to play in the full back line but it is more likely that he could come in for Morrissey if the Ahane man does indeed drop back.

There are certainly some interesting and quality options for John Kiely to look at ahead of the Clare game.

But, if I were to select the team, I would have no hesitation in bringing Costello in for English.

I would also move Morrissey back to full-back to allow Nash to continue his development at wing back.

My Limerick backline to face Clare

Limerick face Clare in the Munster Senior Hurling Championship quarter-final on October 25 at 3.45pm in Thurles.

The post OPINION: Who will replace Mike Casey and Richie English for Clare clash? appeared first on Sporting Limerick.