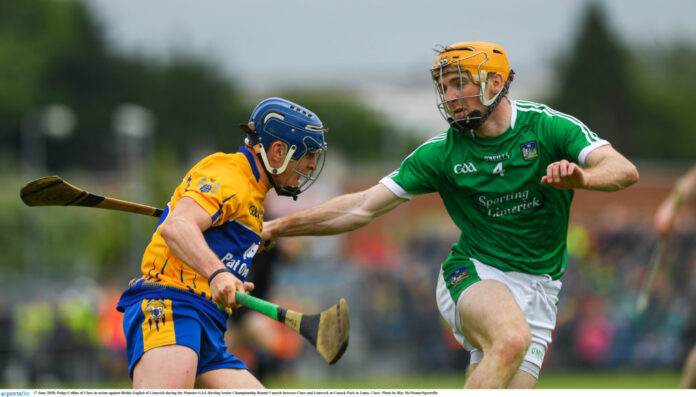 THIS Sunday, Limerick and Clare kick off the Munster Championship as they meet in the quarter-finals of the competition.

The winner will face Tipperary in the Munster semi-final the following week with the loser moving into the qualifiers.

Limerick and Clare have a storied history with magic never too far away in the clash.

Few will forget Ciaran Carey’s point to knock out the then Munster champions in 1996.

The Clare contingent will fondly remember Davy Fitz’ blitz of the 2013 Munster Champions Limerick in the All-Ireland semi-final.

In recent years, the games have been as fiercely contested with the Banner having Limerick’s number for a couple of years.

Below, I look back on the last five championship clashes with the sides meeting in every championship since 2015.

On his debut, a 19-year-old Cian Lynch would prove the difference between the sides as he bagged 0-3 in a one-point win for TJ Ryan’s Limerick in Semple Stadium.

John Fitzgibbon’s 68th minute point would decide the game as Clare raced back into the game despite trailing by six heading into the final quarter.

Limerick had the first score of the game through Paudie O’Brien with Lynch’s trio of scores helping Limerick into a 0-9 to 0-8 lead at the half.

However, Pat Donnellan’s red card just prior to the short whistle gave Limerick a huge boost who moved 1-16 to 0-13 clear on Graeme Mulcahy’s goal after 51 minutes.

Aaron Cunningham’s goal almost instantly after breathed new life into Clare with his second ten minutes later drawing them to within a point.

The Banner would level but Fitzgibbon would have the last word in an eventful contest.

Clare brought Limerick’s 2016 campaign and TJ Ryan’s reign as manager to an end with a dull 0-19 to 0-15 win in the third round of the qualifiers.

Clare opened the scoring but Limerick would dominate the first quarter as they lead 0-5 to 0-2.

But nine unanswered from the Banner prior to the short whistle would turn the contest completely as Limerick would never regain the lead, or get within two of Clare.

Limerick had the first two scores of the second half but three on the bounce had Clare 0-14 to 0-7 clear.

Limerick did cut the gap to a goal on a number of occasions but Clare had an answer each time and were deserving of the win.

John Kiely’s first Limerick game would ultimately end in defeat as they fell to Clare for the second consecutive year.

The concession of two early goals would prove costly as Clare raced into a -5 to 0-3 lead.

But, 1-5 on the trot for Kiely’s side saw them level after 25 minutes with David Dempsey getting the goal.

Five in a row gave Clare the ascendancy and the lead at the break as they lead 2-10 to 1-8.

Limerick rallied on the restart and were within three on 51 minutes when Clare got their third goal of the day.

Clare powered clear and Kyle Hayes’ late goal on his debut would only count as consolation for Limerick.

Limerick missed out on a first Munster final since 2014 as they were overpowered by Clare in Ennis as the Banner moved into the Provincial decider with an eleven-point win.

After two wins and a draw from their first three games in the new round-robin Munster format, much was expected of Limerick who failed to fire against a determined Clare side in Ennis.

Clare had the first two scores of the day but after 20 there was just a point to separate the teams with Clare leading 0-5 to 0-4.

Both sides were reduced to 14-men after a half hour as Clare took a 0-13 to 0-9 lead into the dressing rooms.

Seamus Flanagan’s 36th minute effort had it back to 0-14 to 0-11 but this would be as good as it got for Kiely’s side as Clare outscored the visitors 0-12 to 0-4 down the home stretch to condemn Limerick to the preliminary quarter-final.

Both sides headed into the game knowing that their season was on the line after previous results in Munster.

In the end, the defending All-Ireland champions flexed their muscles to secure an 18-point win and first over Clare in four attempts.

Limerick’s intent was clear from the start as they raced into a 0-5 to 0-1 lead.

Limerick’s 0-15 to 0-7 lead at half time saw all of the six forwards getting on the scoresheet as well as William O’Donoghue from midfield and Declan Hannon at centre back.

Limerick were double scores, 0-22 to 0-11 to the good when Aaron Gillane got the games only goal on 59 minutes.

In the end the gap was 18 as Limerick put the Banner to the sword.