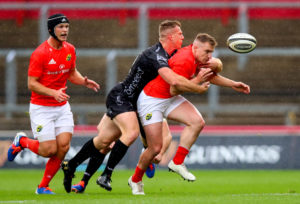 TOP of the table Munster will be looking to maintain their perfect start to the season this Monday when they meet Glasgow Warriors in Scoutstoun.

Despite the difference in form for both sides coming into the game, Munster centre Rory Scannell isn’t taking the game for granted as he expects a tough assignment in Scotland.

“We’re taking it week by week at the moment. We have a tough game on Monday. But we’re in a good position now and hopefully we keep that going.”

“They mightn’t be on the best of form but they will be chomping at the bit to perform. They won their last game against the Scarlets at home and will be hoping to build a bit of momentum. So we are under no illusion as to what is ahead on Monday.”

Listen to the full interview with Rory Scannell below.