Home Rugby Munster 4 Changes For Munster Side To Face Glasgow 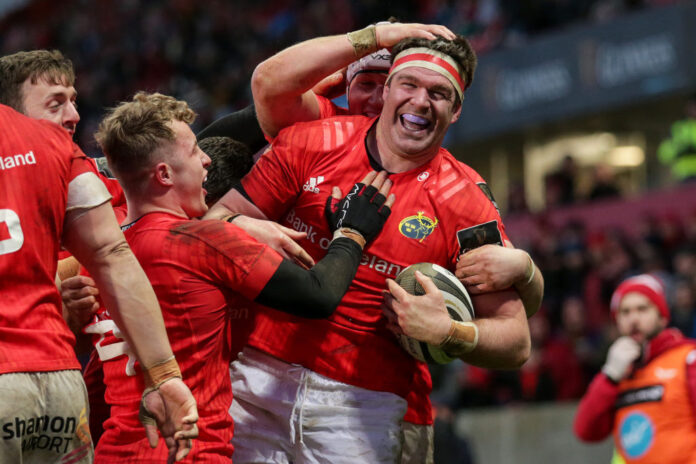 THE Munster side has been named for Monday’s Round 7 Guinness PRO14 game against Glasgow at Scotstoun Stadium (8.15pm – live on eir Sport and Premier Sports).

There are four changes to the side that recorded a bonus point win against Ospreys at Thomond Park last Sunday.

Billy Holland captains the side as he joins Jean Kleyn in the second row.

Fineen Wycherley makes the positional switch to the back row with Jack O’Sullivan starting on the openside for the first time as last week’s player of the match Gavin Coombes continues at number eight.

The front row of James Cronin, Kevin O’Byrne and Stephen Archer is unchanged.

Returning to the ten jersey, Ben Healy resumes his partnership with Craig Casey while the final change sees Calvin Nash start on the wing with Matt Gallagher and Mike Haley completing the back three.

It’s as you were for Damian de Allende and Rory Scannell in the centre pairing.

Named is the replacements is JJ Hanrahan who will make his 100th Guinness PRO4 appearance if introduced, and hooker Rhys Marshall is also included after recovering from a recent thigh injury.

The post 4 Changes For Munster Side To Face Glasgow appeared first on Sporting Limerick.