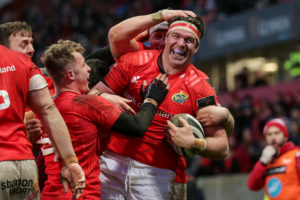 MUNSTER maintain their unbeaten record in the 2020/21 Guinness PRO14 Season after victory over Glasgow Warriors in Scotstoun.

The win is Munster’s sixth of the season as Johann van Graan’s side look to be heading in the right direction. While winning rugby is great, Munster have also added a bit more dynamism to their game this season and have been far easier on the eye for spectators.

Throw in the fact that this was a Monday night game on the road against a team where there is no love lost – and this win was all the more satisfying.