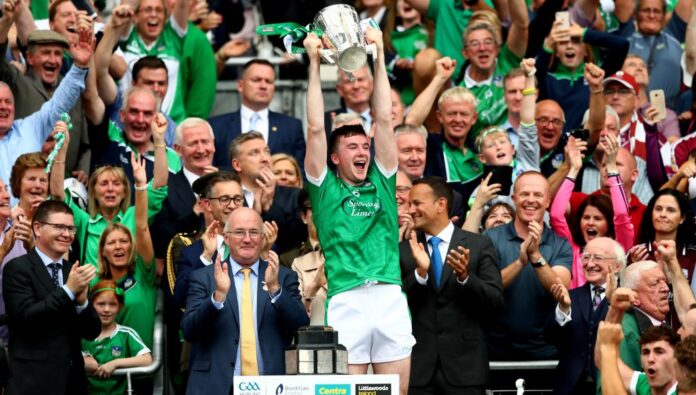 LIMERICK face Galway in the All-Ireland semi-final this Sunday with a place in the December 13 final against Waterford or Kilkenny up for grabs.

This has proven a novel fixture in the history of the GAA with just 12 meetings ever, with the most recent, the 2018 All-Ireland final proving most memorable for the Treaty men.

Indeed, there has just been five meetings of the sides since 1963, including a pair of All-Ireland finals and two semi-finals.

Below take a look back on the those recent clashes.

Two early goals would prove the catalyst as Galway bridge a 57-year gap to win their second ever All-Ireland title over Limerick.

Early strikes by Bernie Forde and PJ Molloy would give the Tribesmen the ealry incentive as they opened a 2-1 to 0-0 lead in Croke Park.

Eamonn Cregan, who would finish with 2-7 got Limerick’s first of the day as Galway took a 2-7 to 1-5 lead into the dressing rooms.

Joe McKenna’s second half goal brought the margin back to 2-10 t 2-6 in the Connacht sides favour.

Cregan’s penalty late on brought it back to a two-point game but Galway would hold out to claim glory with Joe Connolly’s speech remembered to this day.

In a repeat of the previous year’s All-Ireland final, there was nothing to separate the sides as they went to a replay.

In a low-scoring affair, Eamon Cregan once again top scored for Limerick with a personal haul of 0-5.

Joe McKenna clipped over a couple of scores but they would be the only Limerick men to get more than a solitary score on the day.

Brendan Lynskey’s goal would prove crucial for the Tribesmen as the game was brought to a replay a fortnight later in GAA HQ.

As they did in the final in 1980, Galway would prevail over Limerick in Croke Park to book an All-Ireland final berth against Offaly.

Completely contrasting the tense affair from the first day, both sides took the shackles off in the replay with 39 scores compared to just 19 in the original fixture.

As he did in the final in 1980, PJ Molloy would raise a green flag for Galway as would John Connolly.

However the day would belong to Joe Connolly whose tally of 2-7 matched Cregan’s from the final of ’80 and helped his side over the line.

Cregan would finish as Limerick’s leading marksman with 1-5 in the loss.

Galway would go on to lose out to Ofaly in the final as claimed Liam MacCarthy for the very first time.

Limerick would have to wait a further 13-years to return to the last four of the All-Ireland series.

Galway made it three on the bounce over the Shannonsiders as both sides advanced to the quarter-finals of the 2005 All-Ireland championship.

Limerick were made to rue inaccuracy over deadballs as they fell to a one-point loss to Galway in the final round of the qualifiers.

In their first championship clash in 24-years, both sides came into the game knowing they were through to the last eight regardless of the result.

Nonetheless, Galway started much brighter and were 1-6 to 0-2 to the good after Damien Hayes’after 15 minutes.

Second half goals from Ryan brother’s TJ and Donie had it level approaching the final 10 minutes but missed frees would prove costly as Ger Farragher had the last say on Ennis Road.

The side would not meet in the championship for another 13-years.

Limerick’s 45-year wait for All-Ireland glory finally came to an end as they held on from a late Galway fightback to secure the Liam MacCarthy cup.

John Kiely’s youthful side held an eight point lead heading into as many minutes of additional time before the Galway onslaught.

Graeme Mulcahy’s goal middway through the half helped Limerick into a 1-10 to 0-9 lead at the break which should have been more given Limerick’s dominance.

A trio of scores from Kyle Hayes coupled with goals from Tom Morrissey and Shane Dowling looked to have given the Shannonsiders an unassailable lead approaching added time.

Quickfore goals from Conor Whelan and Joe Canning gave the defending champions hope as they reduced the lead to a point.

Mulcahy would grab Limerick’s final score of the year which was cancelled out by a Canning ’65.

The Galway man would have a chance with a long range free with the final puck off the ball but it dropped short as Tom Condon raced clear with sliotar in hand.

The referee blew his full-time whistle as Croke Park and Limerick as a whole erupted in historic scenes.