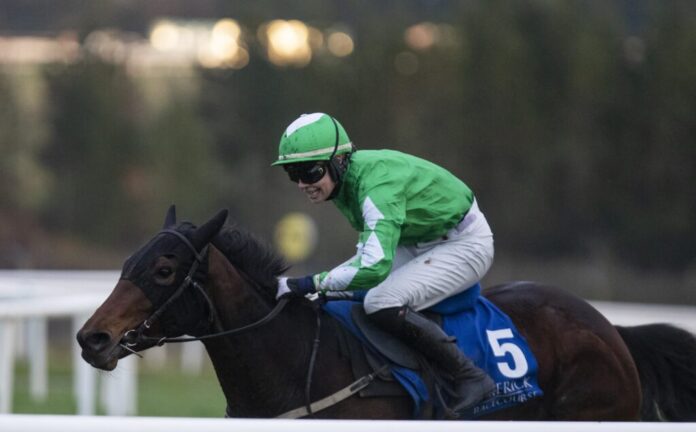 Askeaton amateur rider Aine O’Connor landed the bumper at Limerick on Tuesday on the Padraig Roche-trained Patty D. In the colours of the trainer’s mother Noeleen, the strong 6/5 favourite scored a five and a half-length success from the Pat Doyle-trained Granny Lowrie.

Abbeyfeale apprentice Paddy Harnett rode the only winning favourite at Dundalk on Wednesday. He was successful on the Denis Hogan-trained Boitron in the 7f claiming race.

It was a pretty straightforward success for the 13/8 shot as he beat the Henry de Bromhead-trained Royal Highness by a length and a quarter.

Chris Hayes was on the mark at Dundalk on Friday night where he won the 12f handicap on the Ado McGuinness-trained Pure Nature. The well-backed 9/2 shot raced to a six-length success over the Tony Martin-trained Dundory.

Fog was the ultimate winner at Punchestown on Sunday. A fine card at the home of jumps’ racing was cut short but not before Min landed his third straight win in the Grade 1 John Durkan Memorial Punchestown Chase.

The manner of his success was literally shrouded in mystery, those watching in on television saw precious little as the nine-year-old led home a 1-2-3 for trainer Willie Mullins.

His son Patrick was in the saddle as the 13/8 favourite saw off the gamble of the race, Tornado Flyer by a length with Melon six and a half-lengths away in third place.

The winning rider commented, “He put in an exhibition of jumping, he was absolutely brilliant everywhere. I was really looking forward to going back home and watching it back!”

The Ryanair Chase is the Cheltenham Festival target for the winner. Willie Mullins had also won the opening rated novice hurdle with Power Of Pause which was ridden by his nephew David.

The 6/1 chance easily got the better of the Jessica Harrington-trained 6/5 favourite Crosshill by two and three-parts of a length. Another chapter was added to the remarkable Skyace story as she won the Listed Voler La Vedette Novice Hurdle for Shark Hanlon and owners, the Birdinthehand Syndicate.

Ridden by Jody McGarvey, the 28/1 outsider of the eight-runner field got to the front before the final hurdle and skipped clear to win by five lengths from Gordon Elliott’s Sliding Rock, a fourth career success for the £600 purchase.

Willie Mullins also captured the highlight at Cork on Sunday afternoon where Chacun Pour Soi, already favourite for the Champion Chase at the Cheltenham Festival, impressed with a 19-length win in the Grade 2 Kerry Group Hilly Way Chase.

Paul Townend had the race safely in the bag when he was left clear on the 1/5 favourite by the final fence exits of both Cash Back and Djingle to beat the trailing Darasso in great style.