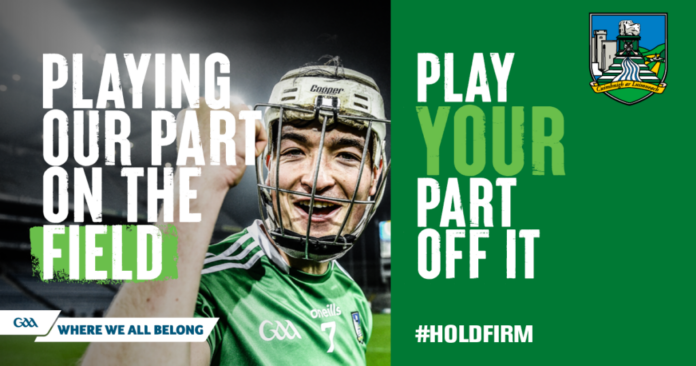 AFTER it was confirmed earlier in the week that the extended Limerick GAA panel will be allowed to attend Sunday’s final, GAA President John Horan says he hopes to see more being permitted to attend the final but will not give out false promises as the GAA continue to liaise with the government ahead of the biggest game of the year.

“This is not a decision of the GAA. This is a government decision.  We went back and made a representation in regard to getting the extended panels in and that has happened. Now people are looking for others to get in.

“Look we will talk to the government, but I’m not going to create false hope for people or anything like that because we are in a pandemic.

“We will tow the line very much on that.” he said.

However, while people will not be able to attend the game together, Horan outlined how the absence of a scramble for tickets will allow families to watch the games together from home.

“Full families may not have always had access to tickets to be at the games together so hopefully it will be a case that families will be together to watch the match at home. It’s unfortunate but I think we are very lucky to have gotten to this stage and that the season wasn’t completely written off.”

This season has been like no other from a GAA point of view and that trend is set to continue on Sunday with the biggest day in hurling having to be toned down dramatically with no pre-match build up, parade or ‘razzmatazz’ as Horan outlined what the build-up will look like.

“Obviously in the ground there is no supporters, but people have seen games that have been exciting, and I don’t think it’s going to impact on the passion of either of the two teams. So, I think there will be great passion on the pitch.

“Obviously the build-up and razzmatazz has to be restricted but we will try and create a bit of atmosphere in the stadium the best we can, and I think the two teams will give us a great occasion on the pitch.”

“There will be no parade or meeting the president. It will be just a case of gathering together for the national anthem and that’s what it will be scaled down to unfortunately. A parade in front of an empty stadium is just not what the parade is about.”

While it is not nearly as visible as the excitement in the lead up to the 2018 decider, there has been plenty of bookings made to watch the game in restaurants and hotels around the country and Horan says it is the responsibility of the owners and people themselves to ensure the game isn’t tarnished by an outbreak in the aftermath.

“I’m fully aware that restaurants and hotels are being booked up by people, but the responsibility lies with the proprietors of those venues, that they are compliant with numbers on the premises and that social distancing is being maintained. We’re doing our best, but we cannot control these individual venues so it’s very much up to the proprietor.

“Nobody wants an All-Ireland victory tarnished by a Covid outbreak in the particular area because that’s what the conversation will become rather than the lads going out on the pitch, performing heroically and winning the competition. And that’s why we are holding onto the cups in Croke Park because we don’t want them to be a reason to gather.

“We’ve been in touch with the civic police, the Guards and the one danger that can come from this is gatherings. We’ve been working with RTE to organise a very good ‘Sunday Game’ so that people will stay at home in their houses and watch that together.”

Horan also confirmed that the Liam MacCarthy will not leave Croke Park on Sunday but will be presented to the winning team after the game.

He added that the trophy will be given out to the victorious time in the future when it is deemed safe to do so however.

“They will get released to the counties, to the clubs in time and they will get to the schools. We are not going to impinge that, it’s just the timing of when that can happen.”

Sunday will mark the end of the intercounty season with the Senior and Joe McDonagh Cup finals down for decision in Croke Park.

In a year of uncertainties, Horan says the organisation have done an excellent job in helping to entertain while sticking to safety protocols.

Furthermore, the outbreak has opened up the discussion for a split season down the line which worked brilliantly in the summer.

According to the president, a decision on this will be made soon but is confident of a split season going forward.

“We are watching everything closely and weighing all the factors up.  But we are going to have to put out a roadmap sooner rather than later just so people know exactly where they are going. The build up at pre-season level, whether it be club or county, they take a few weeks before they even go on the pitch and that’s being sensible to prevent injury problems. So, we will have to give some notice and try map it out for the year.”

“One clear positive of this was that Covid has probably got people more focused in going for a slit season and I think that will benefit the club set up considerably, that they have a definite period with their players, and I think everyone saw the benefit and the buy in from county players with their clubs this year.”