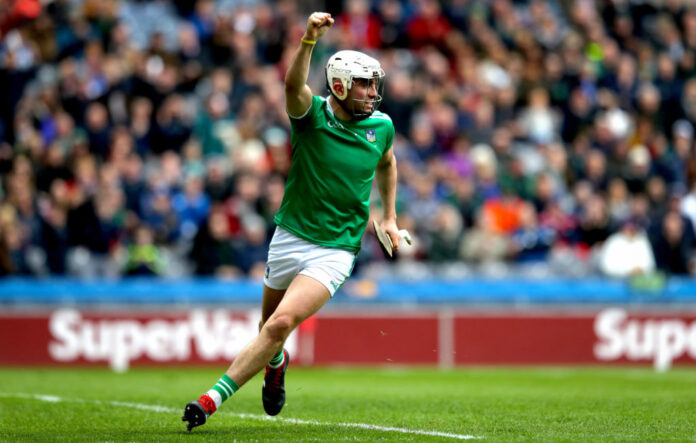 LIMERICK has turned green and white in honour of its hurling soldiers who march into battle against Waterford for All-Ireland glory, this Sunday.
The COVID-19 pandemic has silenced the feeding frenzy for match tickets, due to a ban on supporters attending the game, in line with public health guidelines.
While the virus will deaden the atmosphere at Croke Park, the homes fires on Shannonside are still burning in anticipation of a second Limerick All-Ireland win in three years.
Homes and business across the Treaty City, and County  have been decorated in bunting, flags, jerseys, and paint, in answer to a rallying call from local Public Health, Gardai, and Council, for fans to show their support from a safe distance.
However, for some, the unprecedented times have at times impacted those closest to the players.
Sean Lynch, father of All Star Limerick hurler Cian Lynch, said he was “disappointed” at not being able to share the biggest day in hurling with his son.
“It’s bittersweet, it’s low-key, it’s not the norm, you want to be there, smell the atmosphere, you want to be able to almost touch the grass, shout and roar,” said the retired Limerick Detective and former Fianna Fáil Limerick metropolitan mayor.
Players parents have played a “huge role” ensuring their sons have remained covid-free so that hurling can survive the pandemic, and therefore, “should be allowed attend the match”.
“We have all been in a bubble, and surely to god, four or five members of each of the players’ families should be able to attend a stadium to accommodate over 80,000 people, but it’s not happening,” Mr Lynch added.
He will watch his son play on television at their family home in Patrickswell.
There are also “mixed emotions” for the Lynch family, after Cian’s uncle Paul Carey, a Patrickswell GAA stalwart, died in a road traffic collision in Dubai last month.
“It will be extra emotional because of Cian loosing his uncle and my wife Valerie loosing her brother, but all we can do is wish all the players the very best – they are heroes, regardless of whether they win, loose, or draw.”
Finishing on a positive note, Mr Lynch said that if Limerick bring back home the Liam MacCarthy Cup, “it will be the best ever Christmas present for all the players, their families, their clubs, and their county”.
As the excitement of Sunday drew bearer, local businessman John Fitzgerald was busy colouring the city centre in giant green Limerick flags.
Standing in front of one of the 12 metre x 9 metre green shrines, he said: “There was rallying call to green up the city so we have obliged. It’s fairly substantial, but sure it’s great to support the team.”
He also laughed: “We gave out 5,000 flags in Croke Park for the 2018 semi-final, to try to green the place up, but we ended up getting on the wrong side of the Croke Park officials a little bit, but sure we won’t mind that –  they gave out to us as we were not supposed to do what we did, but sure we got away with it anyway.”
Pat Carroll, a caretaker in his local sports hall, in Croom, was preparing his famous sombrero which he has showed off on the terraces over 20 years supporting Limerick.
Hopeful of a win on Sunday, O’Connell, said: “I think there’ll be nothing between the two teams, but I think Limerick will shade it by two or three points.”
Mr O’Connell or “The Bog” as he’s affectionately known, has become so famous amongst the hurling masses, that he recently appeared as himself in a video of a fake All-Ireland Final staged on the Main Street in Croom in which the Treaty men romped home to victory over the Deise.
He has made “life-long friends” traveling to games over the decades, adding, “Since I’ve been old enough to lift a hurley, it has consumed my life, I’d nearly give up work if I could go to matches everyday.”
He has hope for many more Limerick All-Ireland victories, and laughed: “We should win at least five out of the next six finals, maybe we’ll allow Waterford one here or there.”
The lure of All Ireland Final day attracts all codes and creeds to offer their support for their county team heading into battle for the biggest prize in GAA.
Team Limerick Clean-Up, an initiative funded by Limerick philanthropist and hurling obsessive JP McManus, who also sponsors Limerick GAA, has tweeted videos of stars from the Limerick 1973 All Ireland winning team, offering their support for a victory on Sunday.
Irish rugby legend, Paul O’Connell, a business partner of McManus, who had a promising hurling career in front of him until rugby took over, also offered his praise to the current crop of Limerick stars, telling them: “You’ve been such a pleasure for us all to watch over the last number of years, your skill, professionalism, absolute bloody-mindedness when your play, is a real joy to watch, and makes us all so proud to be from Limerick.”