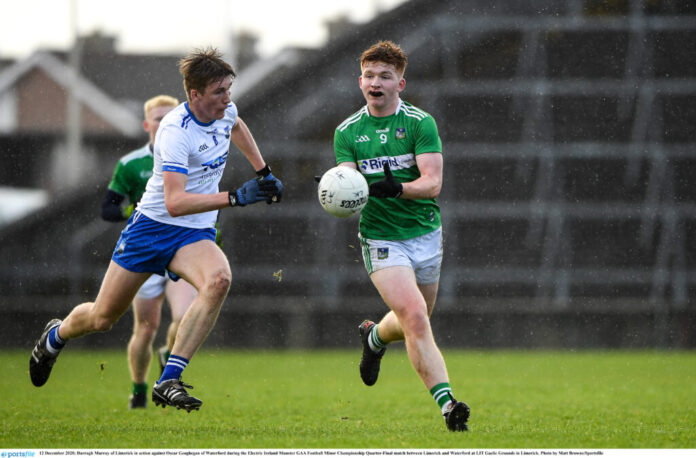 LIMERICK advanced to the Electric Ireland Munster Minor Football Championship semi-final, with a deserved 10 point victory over Waterford at the LIT Gaelic Grounds on Saturday afternoon.

Joe Lee’s side will face the winners of Tipperary and Clare, on Wednesday evening.

The foundation for this victory was laid by a quality second quarter, where they outscored Waterford 1-3 to no score. This meant it was 1-6 to 0-3 each at the interval.

The opening exchanges were tight, but there was a moment of brilliance from David O’Shaughnessy. The Ballysteen man slotted a line ball with his right foot – just one of five points from placed balls. The sides were level 0-3 apiece at the water break.

O’Shaughnessy was joined on the score sheet in the first half by Ciaran O’Sullivan and Gary Sheehan, while Darragh Bridgeman was also on target. Bridgeman looked a real threat throughout.

At the other end, Waterford had just Barry Power and Alan Dunwoody frees on the scoreboard at half time. Limerick doubled their lead in first half stoppage time when O’Shaughnessy slotted a penalty.

The Deise go their first score from play after 32 minutes, Sam Pender flicking to the net with his right fist. However, Limerick didn’t panic and Padhraic McMahon kicked a point before the second Limerick goal. James Killian raided through the middle to latch onto a hand-pass and punch to the net. Limerick in control 2-7 to 1-3.

From here, Limerick had efforts from Oisin Enright, Paddy Kennedy and Paddy McMahon, while O’Shaughnessy added to his total with a mark. Waterford simply had not answer and their defeat would have been greater but for the heroics of keeper David Byrne, who pulled off a string of fine saves late on to deny Limerick further green flags.

A 10 point victory doesn’t flatter Limerick, however, they’ll have to recover quickly before the semi-final clash on Wednesday evening.