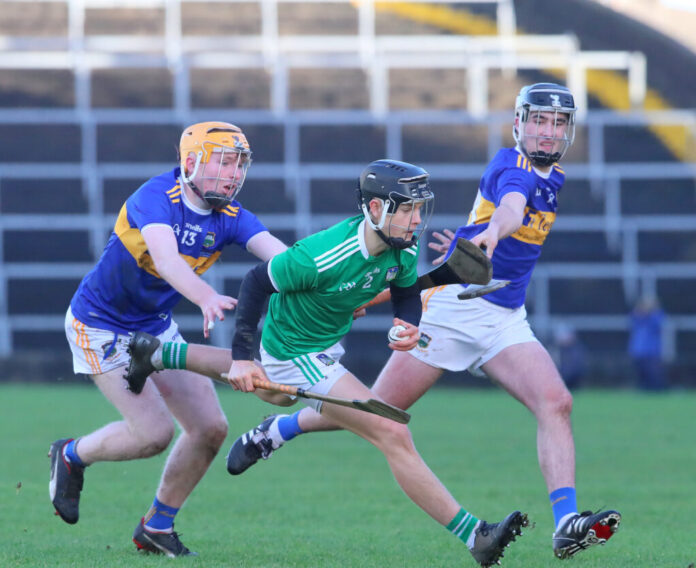 LIMERICK reclaimed their Munster minor championship title in the Gaelic Grounds yesterday as they overcame Tipperary 2-22 to 0-25 after extra-time in an instant classic.

The sides were deadlocked at 2-14 to 0-20 after 60 minutes before a powerful first period of extra-time paved the way for a three point win for Limerick.

Eight of the team remain from last year’s victorious panel as the Shannonsiders retained their title like the squads of 2013 and 2014 which were lead by Richie English and Cian Lynch respectively.

To a man, Limerick were exceptional in the Gaelic Grounds against a top notch Tipperary team and hardly any player put a foot wrong in the win.

A number of players put their hand up for man of the match and below we pick out the performances of five who shone, although any of those that featured could have been chosen.

Throughout the winter we have seen Sean Finn continue his ascendancy into the upper echelon of great corner-backs with the Bruff man on course to win a third consecutive All Star. Limerick’s No.2 is the best in the game and for the minors yesterday, Joseph Fitzgerald did so well in that very jersey.

The Monaleen man was part of a rock solid defence that snuffed out the formidable threat posed by the Tipperary inside line. While it may not have always been the most aesthetically pleasing, Fitzgerald was the leading beacon in a ferocious defensive effort that saw them earn a second consecutive clean sheet.

Last year’s All Star, Ronan Lyons was very impressive in the other corner but yesterday Fitzgerald’s tenacity matched that of his senior counterpart and there are few better compliments.

While Fitzgerald did a lot of the dirty work beside him, Harrington was a huge presence at full back and offered composure whenever he found himself in possession. The Na Piarsaigh man never seemed fazed and consistently took the right option with the sliotar.

The launchpad of so many attacks from deep, Harrington’s strength was a constant feature as he so often broke out from defence.

Again it bore resemblance to a key figure of Kiely’s side and this time a clubmate with so many of Mike Casey’s positive traits to the fore.

To win back-to-back minor titles as a team’s centre-back is a testament to the quality of Newcastle West’s Ethan Hurley. In such an important position, Hurley has been at the helm for the last eighteen months and has rarely put a foot wrong.

His positional play was exceptional in the Gaelic Grounds as Tipperary rarely looked like threatening Tomas Lynch’s goal. Again, a huge figure in the side, Hurley picked up a world of ball and was Hannon-esque in his distribution.

Either side of him, Billy Molyneaux and Sean Whelan were also superb but Hurley anchored the miserly defencce. Will be intriguing to see him with his club in the Premier Intermediate ranks next year.

With Limerick struggling in the opening stages in the Gaelic Grounds, Shan O’Brien was the man to stem the tide as he opened Limerick’s account after seven minutes when they fell behind to three early scores.

O’Brien had his second three minutes later to bring the sides within one. When Limerick took the lead for the first time, it would come from the stick of O’Brien as his third gave the Shannonsiders a 0-5 to 0-4 lead after 17.

Tipp would eventually get to grips with the Kilmallock man but his workrate never wavered even if the scoreboard didnt reflect this.

Nonetheless, he would be the man to kickstart the scoring in extra-time and give Limerick a lead they wouldn’t relinquish. His contribution on the day was immense and he was a key part of a wing forward line including Liam Lynch and Adam English that contributed 0-19 of Limerick’s 2-22.

The name on everyone’s lips in the aftermath of yesterday’s game was that of Adam English as the Doon man captained Limerick to back-to-back Munster glory.

His semi-final exploits promised much but he was slow to get to grips with the game as his fellow wing forward O’Brien lead the early exchanges.

Slowly English got into the game and his two scores in normal were bits of magic, as was his pass to set Eoin Harmon free for the games second goal.

However, he would take control of extra-time and clipped over three brilliant scores to ensure the victory for Limerick.

A real class act and certainly one for the very near future.

The post 5 Players Who Stood Out as Limerick retained the Munster Minor Championship appeared first on Sporting Limerick.