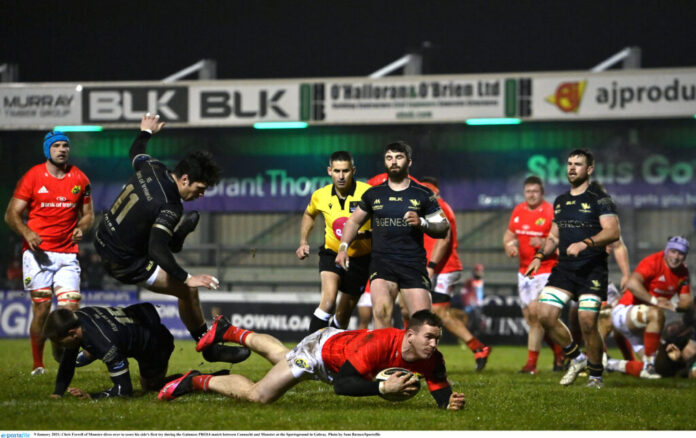 A turnover with 85 minutes on the clock and down to 13 players, finally saw Munster close out a game that they controlled totally for large parts.

In fact they should never really have been in that position but for a huge Connacht fight back.

JJ Hanrahan opened the scoring with a penalty on 16 minutes when Connacht were penalised for collapsing a Munster maul. Three minutes later Chris Farrell crossed for Munster’s first try of the game with the maul again playing a huge part in the score.

Jack Carty landed a penalty with the clock in the red at the end of the opening half to make it a 10-3 scoreline at the break.

Hanrahan landed a penalty two minutes after the restart and again on the 62nd minute as Munster took a controlling 16-3 lead. Connacht did enjoy long spells of possession without ever really causing Munster any major problems.

That was until Peter Sullivan crossed in the 79th minute. Carty kicked to conversion to guarantee a losing bonus point but crucially allow enough time for the restart. Connacht claimed possession, won a penalty and managed to establish an excellent attacking platform deep inside the Munster 22.

Munster were right up against it with two players in the bin and facing an attacking scrum. Based on numbers alone, it seemed like an inevitable Connacht try. Man of the match Tadhg Beirne had other ideas, forcing a turnover to end the game and all but seal Munster’s place in the Pro14 Final.