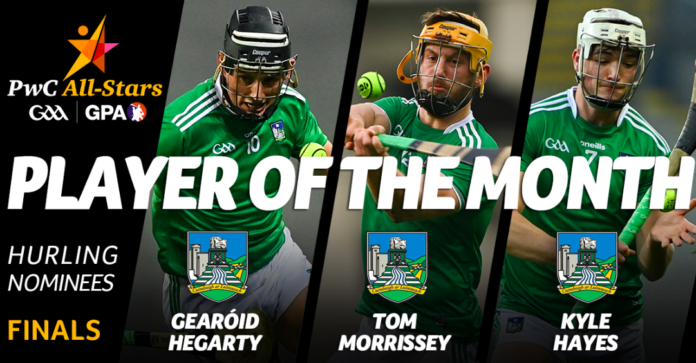 AFTER helping Limerick to a second All-Ireland triumph in three years, Gearoid Hegarty, Tom Morrissey and Kyle Hayes have been nominated for the PWC/Gaelic Players Player of the Month-Finals Award.

Each of the trio had a huge impact on the final and accounted for 0-13 between them in the victory.

Hegarty was awarded with the Sudnay Game man of the match award as he clipped over 0-7 from play.

His wing forward teammate, Morrissey assisted a number of those and chipped in with 0-5 for himself.

Hayes was unfortunate not to finish off the perfect team goal after a brilliant save from Stephen O’Keeffe but the Kildimo Pallaskenry man did chip in with a point from wing back.

Head over to Intsagram page to give your thoughts on who should win the award by clicking here!