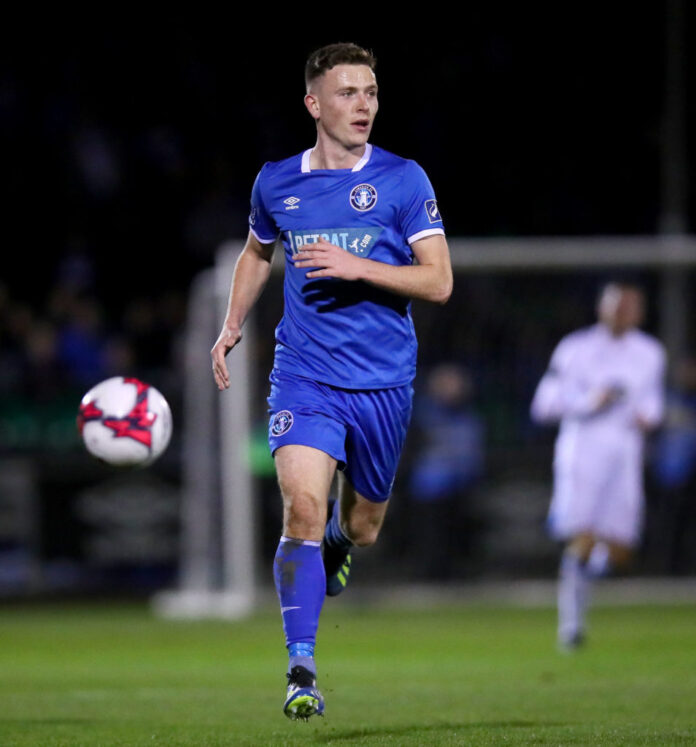 WE continue to look at Limerick born players who are currently playing in the Airtricity League and NIFL Premiership.

Today, the focus is on Killian Brouder, Sam Warde, Lee-J Lynch and Tadgh Ryan with special mentions for others.

Killian Brouder: Brouder was an integral part of Limerick FC’s academy and Tommy Barrett’s U-19 side when they were defeated by Cork City in the league final in 2015. He was named on the substitutes bench for a number of games during the First Division title win in 2016 and the subsequent Premier Division campaign in 2017.

Although the financial issues facing Limerick were crippling, Brouder made the most of a chance that otherwise may not have arrived so quickly when he was an ever-present during the club’s 2018 campaign which ultimately ended in relegation. The Newcastlewest native remained with the club for the first half of the 2019 First Division season before the implications of the club’s financial status became to take shape.

Brouder had been signed on a professional contract but due to financial issues, Limerick were not allowed to have any professional players in their squad from June 2019. As the deadline had passed for Brouder to switch to an amateur form, the ever improving centre-back joined Galway United and impressed new manager Alan Murphy.

Last season, despite suffering some injury problems, he formed a solid partnership at heart of United’s defence towards the end of the season with Maurice Nugent following Kevin Farragher’s departure. John Caulfield had taken over and the Tribesman reached the play-offs before losing to Longford Town. One of Caulfield’s first pieces of business was to tie Brouder down for the upcoming 2021 season.

Sam Warde: The midfielder has had a well travelled and eventful career despite being the young age of 22. Warde was announced as a Portadown player on Thursday with the NIFL Premiership outfit looking for some inspiration to drag them away from a relegation battle.

Warde transferred from local Limerick nursery Mungret Regional to current championship outfit Huddersfield in 2014. Following three years with the club, he joined Colchester United. The technical midfielder decided to return to Ireland in 2019 and spent a season at Sligo Rovers where he made 23 appearances for the Bit O’Red. It was surprising when Warde left Sligo 12 months ago to join Galway United.

Warde was used as a right-back as well as a midfielder on occasion as he made 12 appearances for the Tribesman. He will be hoping for a settled period in Northern Ireland where he can become a first-team regular.

Lee-J Lynch: The former Limerick FC man is also currently plying his trade in the NIFL Premiership with Larne FC who are growing force. Larne were promoted to the Premiership in 2019 as championship winners. They are currently 2nd in the table behind renowned Linfield but are just two points behind with a game in hand.

The former Drogheda man won a league title with Sligo in 2012 before moving on to St. Patrick’s Atheltic. He had two spells with his hometown club, one of which ended in relegation and one which ended in the club being crowned Airtricity League First Division champions in 2016. He is the nephew of former Limerick FC and Waterford manager Tommy Lynch.

Tadgh Ryan: A very talented goalkeeper and much like Sam Warde and Ronan Coughlan, Tadgh Ryan was on the books at Huddersfield Town before returning to Ireland to sign for Galway United in 2018. With the Tribesmen, Ryan made 24 appearances in total for the First Division outfit as he established himself as the club’s first choice goalkeeper.

His performances impressed Cork City who swooped for the netminder in 2019. Ryan was an understudy to Mark McNulty for virtually the whole campaign but produced impressive displays towards the latter half of the campaign and it seemed likely that Tadgh would remain with the Leesiders for the following campaign.

However, it was not to be the case as the arrival of Neale Fenn and other reasons led to the county Limerick native leaving and joining Munster rivals Waterford FC. Unfortunately for Ryan, he faced stiff competition from Waterford native and former QPR and Bohemians goalkeeper Brian Murphy who was club captain and had a stellar season between the sticks for the Suirsiders.

Coughlan has re-signed for the East Cork outfit for the 2021 campaign. Stuart Ashton’s men were unlucky to miss out on the play-offs and were in the hunt until the final night of the season. As it turned out, if Cobh had managed to score one goal, they would have reached the play-offs due to Cabinteely’s deduction of three points. Lynch is currently unattached having left Galway United following the conclusion of the 2020 seas son in November. He is the son of Tommy Lynch and cousin of the aforementioned Lee-J Lynch.

Joel Coustrain is currently signed with local side Regional United after departing Athlone Town. Since his return to Ireland following a spell with Sheffield United, Coustrain has played with the Midlander’s Cork City and most notably Shamrock Rovers. ,