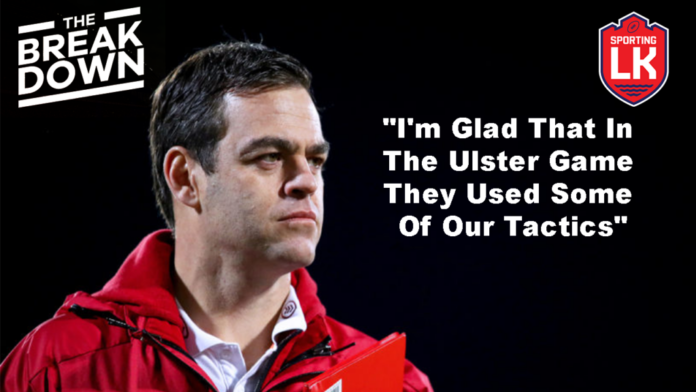 JOHANN Van Graan has “big dreams for the season” and isn’t a man to shy away from wearing his heart on his sleeve once a campaign heats up a degree or two.

At Tuesday’s press conference looking ahead to Saturday evening’s Munster – Leinster interpro at Thomond Park, it was clear the South African was looking forward to the battle.

The last time these two sides met was in the Pro14 semi-final of 2020 where Leinster ran out 13-3 winners in a low-scoring affair.

Following his side’s victory, Leinster head coach Leo Cullen was less than complimentary towards Munster’s approach commenting “It was brutal, one for the purists for sure. You’ve got to be very accurate against a team that all they want to do is box-kick”

Four months may have passed since, but one question in and Van Graan was reminded of such criticism from the Leinster camp – a question he was more than happy to respond to.

“I’m glad that in the Ulster game two weeks ago at least they used some of our tactics in that game, so that’s brilliant to see.”

The 40-year old is more than happy to compete by “doing whatever is necessary to win” against a side as good as Leinster. Although determined to implement whatever gameplan he likes on Saturday’s opposition however, he is also respectful to the challenge.

“It’s another game in our season, we have played nine games in the Pro14 and won eight and so have Leinster. They are definitely one of the form sides of the competition and of the last three years.

“They have played eleven games this season across all competition and have eleven bonus points. They are such a quality outfit – we know that and they know it. “

Munster haven’t been so bad themselves this season and as echoed by Damian De Allende talking to the media this week, the team’s focus is firmly on sticking to their own principles and plans rather than becoming overwhelmed by the importance of the fixture.

The post Johann van Graan “I’m Glad That In The Ulster Game They Used Some Of Our Tactics” appeared first on Sporting Limerick.