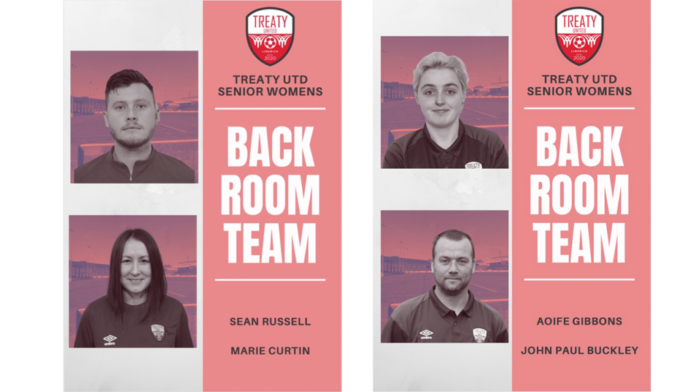 TREATY United manager Niall Connolly has unveiled his backroom team for the the 2021 season which will begin on March 26th, it was announced today.

Connolly has acquired the services of former Limerick FC player Sean Russell and former Treaty United captain Marie Curtin, who recently retired from her playing role with the club. They will also be joined by John-Paul Buckley and Aoife Gibbons.

Russell was forced to retire from football in 2019 following an injury picked up while representing Limerick FC in a league game with Athlone Town in 2019. He has been involved with Limerick junior club Aisling Annacotty in a coaching capacity and is excited to join Connolly.

“I’m delighted to be on board as part of Niall’s coaching staff for the upcoming season. The vision the club and staff has is something that I wanted to be a part of. I’m really looking forward to getting onto the training pitch and working with the players.”

Curtin worked with Connolly last season as a player during the club’s maiden season in the Women’s National League which will now be sponsored by Airtricity for the next two seasons in a very positive move. She added that she is looking forward to the job of coaching a talented group of young players.

“Its been an honour to be a part of this club since its inception. Delighted to be coming in as coach for this exciting young group of players. Niall is a talented & dedicated young manager that I can’t wait to start working with. Thanking the club for this opportunity.”

John-Paul Buckley returns as goalkeeping coach for the 2021 campaign and is also eager to be part of the new management set-up having worked with Niall Connolly before.

“I’m delighted to be back as GK coach for the 2021 season, huge thank you to our newly appointed Senior Womens Manager Niall for giving me the opportunity to continue my work as GK coach. I am Looking forward to also working with Marie, Aoife and Sean along with the Treaty United board as we plan for the new season. Exciting times ahead.”

Aoife Gibbons echoed Buckley’s sentiment and is proud to be working with the current crop of players who will be looking to improve on last season’s 9th place finish this year.

“I am delighted to have the opportunity to work with these girls again. They are a fantastic and talented bunch.”