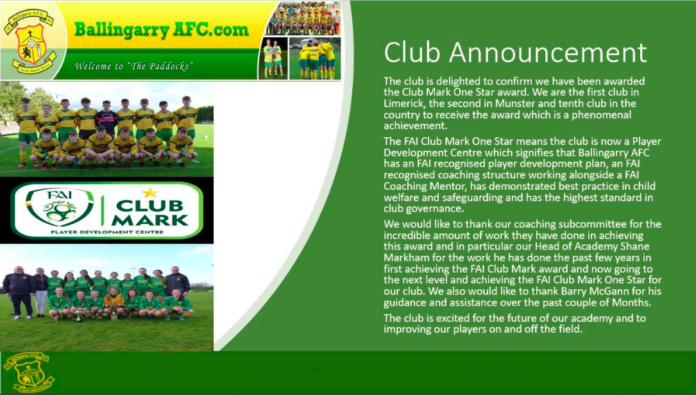 LIMERICK Desmond League club Ballingarry AFC have been awarded with the club Mark One Star award by the Football Association of Ireland this week.

It is an incredible achievement for the club who are the first in the Treaty City to be given the award and just the second club in Munster. It is recognition of the club’s attainment of a high standard of Governance throughout many years.

Ballingarry AFC is now recognised as a player development centre by the FAI with a top class coaching structure along with excellent training facilities. In a tough year for football in the region, it is a very positive news story to begin 2021 with.

The club have made huge strides in recent years and hosted Women’s National League U-17’s games in 2020. The quality of the playing surface is superb and Ballingarry minor team were unlucky to miss out in the final of the Munster Youths U-18’s in August against Villa FC of Waterford in a penalty shoot-out defeat.