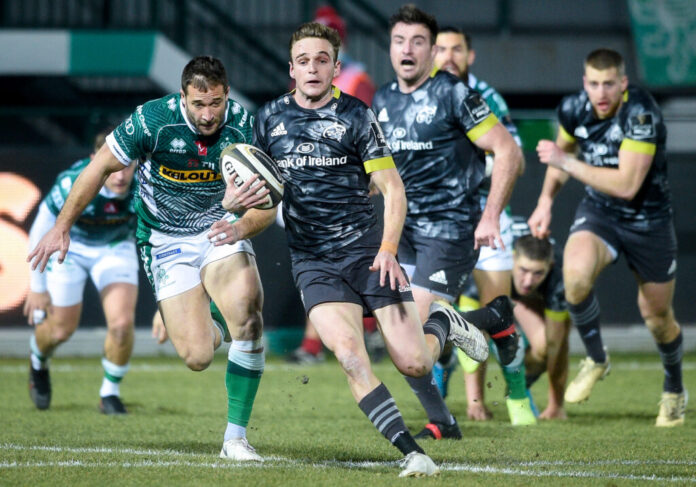 JJ Hanrahan struck a sweet drop-goal with the clock in red to get a sub-par Munster out of jail this evening against Benetton.

Munster started brightly. The youngsters threw the ball about and left Benetton’s defence in tatters with virtually every attack in the opening fifteen minutes. However, things turned increasingly sour from there. The second half was dictated by the home side and in the end Johann Van Graan’s team were very fortunate to come away with the win.

Within ten minutes Munster led this one 12-0 as Benetton struggled to cope with the attacking intent of the visitors. Darren Sweetnam capitalized on an error from Benetton fullback Jayden Hayward after just five minutes to collect a grubber kick that bounced fortuitously off the left corner flag.

Ben Healy failed to convert his first kick of the night but made no such mistake on the ten minute mark when he added the extras to a brilliant Niall Scannell try. Munster had no issues creating line breaks against a leaky Benetton defence and Scannell ran an excellent support line to dive over after three superb offloads from his free-flowing teammates.

Benetton were reduced to 14 men after twenty minutes with prop Marco Riccioni sent to the bin. Against the run of play however, the home team did manage to grab an unlikely try in the 25th minute. Kieran Crowley’s men identified an overlap on the right wing and spread the ball into the hands of winger Angelo Esposito who danced in to cut Munster’s lead to just seven points. The conversion from outhalf Tomasso Allan was unsuccessful.

Before half time the weather deteriorated and Munster’s play did likewise. Benetton managed to enjoy better possession and field position in the final ten minutes of the half, applying pressure. Munster’s accuracy and discipline was duly punished when the Italians were awarded with a penalty kick in front of the posts on 32 minutes. This time the outhalf’s kick was on target to make it 12-8.

Before the half was out Munster failed to refocus themselves. Sloppy phase play deep inside their own half cost Van Graan’s side another three points in the fortieth minute. Suddenly, despite such a perfect start. Munster headed into the break leading by just a single point.

The second forty continued to be dominated by Benetton. Munster showed little patience or creativity in attack and matters were not helped by losing the battle at the breakdown.

It wasn’t until the 55th minute that Munster scored again. In what was Munster’s first purposeful attack of the second half, they were awarded with a penalty in a kickable position. Ben Healy stood up to the plate to knock the ball between the sticks and make the scoreline Benetton 11-15 Munster.

Yet Benetton took control soon later and made it count. With 70 minutes on the clock Mike Haley did brilliantly to hold up the hosts out wide. From the resulting scrum Benetton spread the ball from left to right and Leonardo Sarto skirted over to put his team ahead. Tomasso Allan failed to add the extras but the Italian outfit now had an all-important lead at 16-15.

In truth Kieran Crowley’s Bennetton thoroughly deserved to win this encounter. Munster failed to fire in any department and poor individual performances were as much to blame as anything. Benetton enjoyed the majority of possession, won the competition on the deck and could well have scored more points had they been more clinical.

However, Munster’s favourite party piece made another comeback. A last minute penalty was kicked inside the Benetton half for a lineout, Munster mauled the Italians back over ten yards but could not force them into leaking a penalty. The ball was shifted to the backline and after a couple of carries up stepped substitute JJ Hanrahan.

Having experienced a difficult week following last weekend’s display versus Leinster, the Kerryman was no doubt keen for redemption and he made no mistake. The 28-year old caught the ball outside the 22 metre-line, struck it sweetly and watched it fly between the posts for Munster victory.