Home Other Cycling WATCH: “As long as I remember, this is what I wanted to... 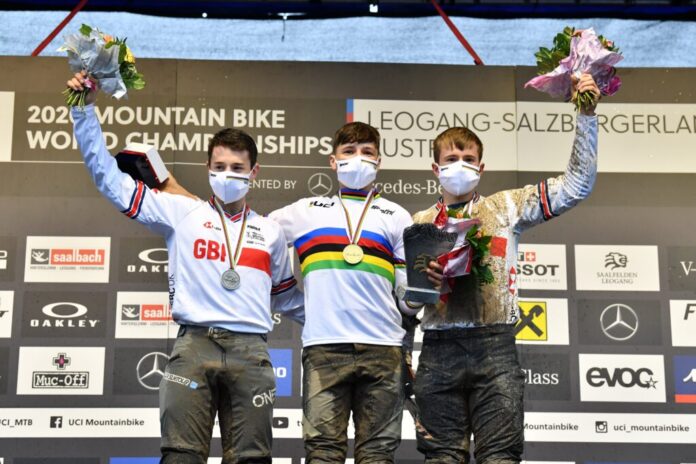 IN October, Limerick’s Oisin O’Callaghan became the first Irishman to claim the Rainbow at the World Mountain Bike Downhill Championships.

He followed that success with a second win a week later before being named the Young Irish Sportsperson for 2020 at the RTE Awards last week.

The 17-year-old claimed the Junior crown in a heavily disrupted season against all odds after starting the race in an unfavourable position with as the youngster described the experience of the championships.

“Even being there, there was no real pressure for my first race as a Junior and I was one of the youngest there. Walking the track, it was pure muck, like being at home. It was Irish like conditions and riding in the wet and snow was natural.”

“It’s slightly different. In a World Cup, it’s over three days while the World Championships are over four. The first day is practice so you can do as many runs as you want. The second day, you have two hours in the morning, then you have your qualifying run so it puts you in order for your race run. It eliminates the quicker people catching the slower so they go first and the quicker go last.

“Then the third day is another day of practice and the fourth day is race day. You have two hours practice in the morning and one run to lay it all down.

“My position in the race run was pretty bad. So I was in the hotseat, with 40 riders to come after me so I had to wait for about an hour.

“I can’t really remember what I did after the race. The other riders, who I had been with over the summer started roaring that I had won but I didn’t really believe them. It’s something I cannot put into words.”

And for O’Callaghan, there has never been any doubt in his mind as to what he wanted to do as he grew up.

“People ask me, ‘when did you know you wanted to do this?’

“In primary school, there was a picture that said, what do you want to do when you’re older and everyone had their jobs and I had that I wanted to be World Champion!”

The triumphs in 2020 were backboned by a long preparation when competitions were in doubt as he explained how he and his father continued their training even when everything was up in the air.

“It didn’t look likely but thankfully it went ahead. People thought it wouldn’t happen but it did. We didn’t get the full calendar but we got some races and it was better than nothing. We had a date to build up which was supposed to be in April, then it got postponed and reorganised.

“It was continuously reorganised and postponed and that’s when people thought it wouldn’t happen. But me and my Dad continued to train, to go to places like France, Switzerland and Italy. Training for two and half months to get up to speed on the quicker tracks I’d be racing on.

“Some of the stuff is so steep, you cannot stop. You’re on the brakes, picking up momentum and hoping you can commit and make it around.”

And not to rest on his laurels, O’Callaghan is looking forward to more success in 2021.

“For the last five or six years, a week after the last race, I’m back training. So I’m training, 6/7 times a week. I don’t count the bike as training, it’s just fun.

“I’ve got a few goals I want to achieve.”

Watch the full interview with O’Callaghan below.

The post WATCH: “As long as I remember, this is what I wanted to do”- Oisin O’Callaghan on his rise appeared first on Sporting Limerick.