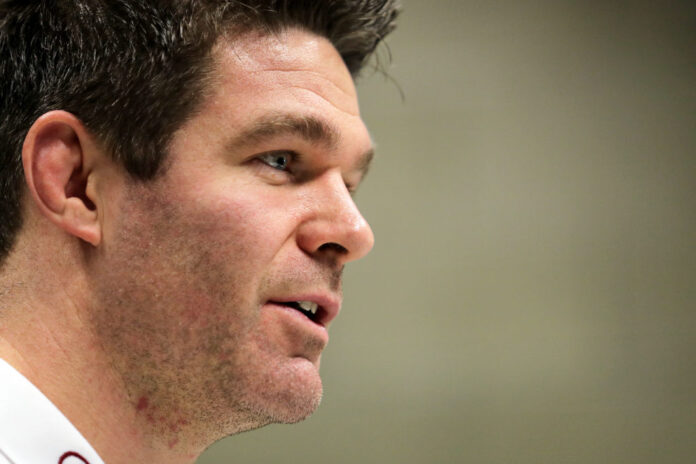 WHEN I was a teenager, I thought the world operated on a set of rules. You do well in the Leaving Cert and that means you can go to college.

If you get your degree in college you get to go out and get a job related to your degree and then, that was your life.

I wanted to be a teacher when I was lining up my CAO but that didn’t work out so I ended up in Rec & Leisure for a while before I did a degree in Media. My search for certainty wasn’t off to a great start, was it?

My first real job after college was in… construction as a site clerk/labourer but I still had hopes that one day, the certainty I grew up expecting would arrive and then I would “be” something for the rest of my life.

Whatever about anything else, you had a thing that you did and you got there by ticking off things on a checklist.

The question mark was whatever else you wanted to do with your life but you always had that thing that you did. It was dumb, I know, but when you talk to 15-year-olds about the Leaving Cert like it’s a grand sorting mechanism for the rest of your life it can lead to overthinking.

It was 2009 when I realised that, hang on, this checklist thing is bullshit.

Construction was one of the first things to get hit by the financial crash of 2008/09 but I remember thinking that it was OK because, after all, I had my degree to fall back on! It turned out a degree is about as useful as toilet paper when everyone else is looking for the same, ever-shrinking number of jobs with different flavours of the same qualification.

So I was unemployed. I went on the dole, obviously, but my rent and other expenses meant that I had no wiggle room whatsoever week to week. If an unexpected bill came up – like car trouble – I would have to find that money from somewhere else.

Rob Peter to pay Paul, so to speak. I applied for the usual rent allowance schemes and other things to try to buffer my existence with a bit more money but I was one of thousands doing the same at the time. I never got what I needed so the gears of life began to grind quite heavily week-to-week without the grease that money gives you.

Keep in mind that I was also an undiagnosed schizophrenic at the time so my ability to navigate this treacherous path was hindered by being an unreliable narrator of my own existence.

When life is uncertain, you live week-to-week.

When life is perilously on edge, you live day-to-day.

When you are in a crisis, you live minute-to-minute.

When I was at my worst mentally, I lived minute to minute because I couldn’t be sure that I would be living in an hour. I had lived day to day for too long.

My life was uncertain, so I craved the certainty that nothingness would give. It was final- brutally, terminally so – but at least all the uncertainty would be over. I obviously stuck it out. I went back to day-to-day until Three Red Kings helped me live week-to-week again.

Week-to-week living meant being able to pay for my bed in the hostel a week at a time. When you’ve lived day-to-day long enough, knowing that the food and board for the day after tomorrow is accounted for is so liberating it still makes me choke up thinking about it.

Right now I’m living month-to-month. It’s way better than it’s smaller, shorter cousins, I can assure you. I live month-to-month because I can’t know that my subscribers will still be here next month and that isn’t cribbing or begging for subs, it’s just the reality of the nature of the work I have found myself in.

Ideally, I think you want to be living in year-long blocks. That’s what I’m aiming for. One day I hope to own a place of my own and know, for sure, that I can pay to stay there and feed myself for at least a year with a fair wind. I don’t really have massive aims anymore. The world has knocked those ideals out of me.

I just want enough so that I can live year to year for the first time in 15 years.

So last week, during Billy Holland’s press conference pre-Benetton, I really sympathised with what he spoke about regarding the ongoing contract negotiations going on at Munster and the other provinces.

“It’s a tough time for guys. There are guys who don’t know what their futures hold in a couple of months’ time so it is a difficult time for a lot of players. They’re under a lot of stress and strain, particularly for younger guys.

I’m 35, it’s a little bit different, but for young guys with their whole career ahead of them and there’s so much uncertainty and not many places to go to, it’s a very difficult place to be.”

These are the people who we speak about on depth charts and possibly usages in squad rotations going forward. More than a few of these guys are living in a world where they don’t really know what’s happening past June of this year.

Will they be playing at Munster? Will they be moving somewhere else? Will they still be professional rugby players? All of those options are on the table so believe me when I say that I really, truly understand the feeling of unease that comes with that uncertainty.

Imagine the pressure of having to play a game in front of a watching audience (in-stadium or, right now, live on TV) with the expectation of “I have to play well here so I can be in a better position to earn a contract”?

How is it possible to express yourself properly with that kind of grind hanging over you? I’m sure some guys can, and maybe some of them even like that kind of pressure, but I can forgive any player for not being at their best with a cloud hanging over them.

Hustle culture – the idea that endless work and an endless pursuit of goals is not only desirable but virtuous – tells us that failure is not an option when it comes to living your life because what you do IS your life.

On the contrary, failure is the most readily available option there is so the concept of “I Cannot Fail” is very often met with the hard reality that you have, indeed, done just that.

So I cannot blame any player who takes certainty above all else in the next few months. Already, in Scotland, we’ve seen guys sign three and four-year-long contracts because of the certainty that comes with the times we live in.

In normal times, two-year deals suited players and clubs because the risk was balanced somewhat between the two. A player’s career can end at a bad ruck, sure, but they can also go on to increase their value over that two year period which either leads to a raise at the club they’re at or a list of clubs willing to give them that raise.

But COVID has changed the business. Contracts are harder to come by. Money is going down for most people and there are fewer places to land, even if you scale down your ambitions for where you’ll play or for how much.

As fans, we are eager to hear who is being re-signed and who is being brought in because whatever happens, we’re going to be here in some capacity. My eyes always tend to turn the guys who aren’t in the “new deal” graphics. I feel their pain and I can only hope they find a place that they can build their time how they like without a ticking clock in the background.

At least until the next contract season.