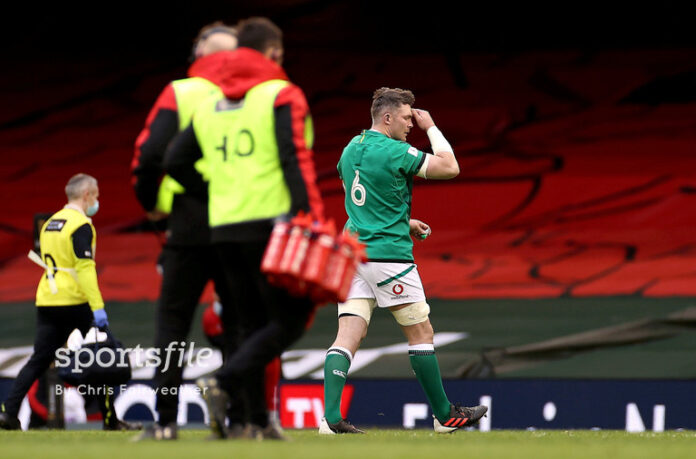 IRELAND battled bravely this afternoon but a red card to Peter O’Mahony and an 84th minute miss-kick from replacement outhalf Billy Burns allowed Wayne PIvac’s Wales to come away with a surprise opening day victory.

Ireland’s 14 men can be proud of their efforts but George North and Louis Rees-Zammit second half tries ultimately capitalized on the extra man advantage. Though sometimes disjointed, Ireland showed some great management and character at stages to drag themselves right into contention for the duration of the game.

Billy Burns did have the opportunity to kick into the corner in the final play of the game as Wales handed Ireland lifeline after lifeline. However, the Ulster man kicked the ball out on the full much to the disappointment of himself and his teammates as the match finished Wales 21-16 Ireland.

It was a nightmare start for Ireland as Peter O’Mahony saw red on 13 minutes for a reckless clear out and the Munster captain could have no complaints. Wayne Barnes initially saw no foul play, but upon the TMO review it became clear that he had no choice but to send off the Cork man.

O’Mahony had dove dangerously into a Welsh opponent at the breakdown above shoulder height and paid the ultimate price.

Ireland’s forwards rallied remarkably well following the incident. Ireland stole Welsh lineout ball on more than one occasion and battled on in impressive style as the likes of Cian Healy and Tadhg Beirne led the charge for the outnumbered visitors.

Wales defended well for a period but Ireland’s best player on the day Robbie Henshaw eventually made a chance out of nothing. The Leinster centre stepped and accelerated, offloaded to Josh Van der Flier and the flanker was dragged down inches from the whitewash. From there the in-form Tadhg Beirne picked and jammed his way over to give Ireland an unlikely lead.

At half time the scoreline read 13-6 to Ireland. Ireland put in a huge effort to compensate for the loss of O’Mahony and life was made even harder when James Ryan went off with a head injury. Performance levels needed to be equally high in the second forty but it wasn’t long until George North added to two Leigh Halfpenny penalties to make it 13-11.

From there Wales turned the screw and Ireland’s discipline deteriorated. A Welsh lineout deep inside Ireland’s 22 was caught with 58 minutes on the clock.

The home side carried hard for a couple of phases making an indent in Ireland’s defence before flinging the ball wide to 20 year old winger Rees-Zammit who finished brilliantly.

In the closing fifteen minutes Leigh Halfpenny and Billy Burns exchanged penalties, but it became clear that bar anything miraculous it was going to be Wales’ day. Ireland gave it a good go, carrying and working relentlessly to make an impact in the Welsh 22 without ever coming particularly close to scoring. For all of their valiant efforts, it was Wales who were eventually able to secure possession in the final minutes inside Ireland’s half.

Bizarrely, the home side kicked the ball away with only seconds remaining. An intentional knock-on later and Ireland had a penalty and a golden ticket to grab a memorable win. Andy Farrell’s men attacked purposefully and aggressively in pursuit of a famous try, leaving Wales under immense pressure. Such pressure told when they leaked an 83rd minute penalty and the game was suddenly in reach for Ireland.

84 minutes on the clock and with Johnny Sexton off the pitch, Billy Burns stepped up to find touch deep inside Welsh territory. The Ulster number ten was brave and aimed right for the 5 metre-line but badly misjudged the connection and fired it out on the full to hand Wales the win.

France are up next and Ireland will need a huge improvement to turn their Six Nations around.