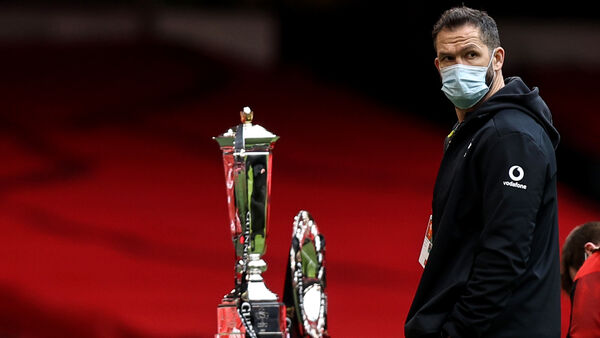 Ireland were right in the contest throughout despite a 13th minute Peter O’Mahony red card and even led 13-6 at half time. Head coach Farrell could not have asked for any more effort from his men, but in the end two second half tries from George North and Louis Rees-Zammit secured the victory for Wales.

Farrell admitted he was very disappointed following the result but also saw the positives in his team’s display.

“I’m just gutted that we didn’t back that (performance) up with the win because it was there to be had.

“For various different reasons, that we’ll talk about after we review the game, we didn’t get to celebrate what would have been a famous victory. Because some of the efforts, collectively and individually, were immense.

“Lads coming back playing their first games for quite some time – that will stand them in good stead for the rest of the Championship. We certainly had opportunities to win it. We’ll look at a few moments within the game that we’ll kick ourselves with.

“Obviously the red card and a couple of decisions that could have gone our way, regarding yellow cards, etc. That will be reviewed.

“With one exit scrum we knocked the ball on and that gave them the try. A valiant effort and I thought we played some really, really good stuff at times and asked a lot of questions.

“At the same time, we were in with a fight right at the death to win the game. I thought if a few more things had just been a little bit tighter, that were in our control, we could have won the game.”

Up next for Ireland is France and openside flanker Josh Van der Flier is fully aware of the magnitude of the challenge ahead.

“I saw a bit of their game yesterday, France looked very dangerous, as always. They’re in great form. In terms of their individuals, they’re obviously up there with the best teams in the world.

“It’ll be very, very tough. Haven’t obviously had too much of a look at them yet, but we need to win of course and we’ll be looking to put in a big performance against an incredible team. It’s going to be tough, but we’ll take the learnings from today.

“I think there was a lot of positives, especially how hard we worked and the heart we showed. If we add a bit of accuracy into that and hopefully we’ll be in a good place for competing with them.”