Home Rugby Ireland Six Nations Team Of The Week: Round One 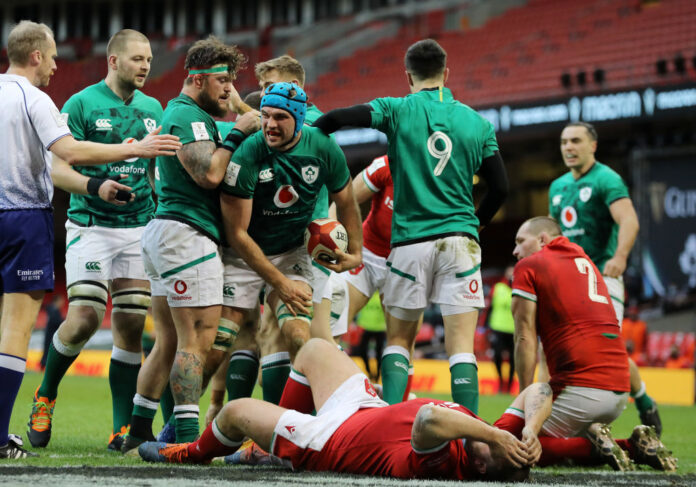 THE Six Nations came back with a bang at the weekend. Three action-packed matches made for spectacular viewing throughout Saturday and Sunday as we were treated to some incredible moments and performances.

Although 14-man Ireland didn’t quite get the job done against Wales, there was still plenty for rugby purists to get excited about. France and otherworldly scrumhalf Antoine Dupont produced the most gorgeous rugby in an elegant free-running destruction of Italy.

The majesty of Stuart Hogg, Cameron Redpath and Finn Russell provided variety and flavour to Scotland, but it was their forward pack that truly put in an epic shift to secure the Calcutta Cup.

Passionate, positive and precise, it’s difficult to recall a better Scottish Six Nations performance and it is Gregor Townsend’s men who feature most heavily in our team of the week.

The Welsh loosehead won Man of the Match against Ireland with a relentless performance around the park. Wales had no problems in the scrum and thanks to tireless performances from the likes of Jones they duly capitalized on Peter O’Mahony’s 13th minute red card.

Scotland’s win over England was the story of the weekend and the industrial George Turner was central to the effort. Gregor Townsend’s men enjoyed accuracy at the set-piece and used the platform to assert their dominance on a rusty England team.

Likewise to Turner, tighthead prop Zander Ferguson led the charge for an inspired Scotland with 8 carries. The display from the forwards was close to flawless, leaving Eddie Jones’s home side on the back foot for the duration of the match.

21 carries, 10 tackles, a try, an offload, 2 turnovers, 8 passes, a thousand clear-outs. Ireland weren’t perfect in their defeat to Wales but the display of try-scorer Beirne almost single-handedly compensated for the dismissal of Peter O’Mahony. A menace at the breakdown and an all-rounded ball player, the Kildare man continued his brilliant early season to show why he needs to be a permanent starter in green.

The Scotland second row is famed for his flawless tackling and while he made 12/12 on Saturday evening, it was his 16 carries that set the tone for the visitors. A leader and a certainty for the Lions tour. Alun Wyn Jones and Maro Itoje were also excellent at the weekend but Gray was instrumental in his country’s first win at Twickenham since 1983.

France’s forwards set the tone for an emphatic drubbing of Italy so it is only right that at least one of them is included in the team of the week. 23-year old Cretin scored a try, made ten tackles and won a turnover in a well-rounded display.

Another brilliant Scotsman. Watson has been consistently outstanding for a few years now without getting household name recognition. His 12 carries, 12 tackles and vital turnover against England is about standard for the Edinburgh openside and he is possibly the finest number seven in the whole competition.

The bruising Glasgow number eight made 16 carries against England for 30 metres. Still just 22, Fagerson is a vital cog in the Scottish forward pack and could well have a big tournament to put his name on supporters’ lips across the continent.

The best player on planet Earth right now. The unplayable French number nine put in another masterclass on Saturday against Italy with 4 assists and 1 try in less than 60 minutes. Words can’t describe the talents of this man right now.

It wasn’t a vintage weekend for outhalfs. Finn Russell put on an exhibition of passing play and assisted Duhan Van der Merve against England but his day was otherwise error-ridden with 2 missed kicks at goal and a yellow card. Sexton and Biggar did put in solid shifts but France’s electrifying demolition of Italy circulated around the halfback partnership of Dupont and Bordeaux’s elegant number ten Mathieu Jalibert.

Scotland have unheralded an excellent winger in Van der Merve and the Edinburgh player scored the key try in their win over England on Saturday evening. Powerful, explosive and competent in the backfield, the 25-year old completes an electric Scottish backline.

Scottish debutant Redpath was incredible against England showing an appetite for work, explosion in the carry and a high rugby IQ beyond his years. However, Robbie Henshaw put in his best performance in a number of years for Ireland against Wales to create his side’s only try of the afternoon and prove a beacon of light for the disjointed visitors.

Another young superstar on France’s hands. The 21 year-old outside centre tore it up against Italy by making four clean breaks for 70 metres, scoring a try and making 15 tackles. The Montpellier man will certainly be a talent to watch in the coming weeks.

The electric Racing 92 winger showed how important he could be to Les Bleus with two tries and an assist against Italy. Ireland are up next for France and Andy Farrell’s men can ill afford to give this danger man an inch of space if they are to come away with a positive result.

In contention with Dupont for player of the week. Stuart Hogg put in arguably his finest ever performance for Scotland against England. Extraordinary running play saw him beat 8 defenders for 88 metres, he put on a spiral kicking masterclass to heap pressure on the home team throughout and deservedly lifted the Calcutta Cup. A true superstar.

The post Six Nations Team Of The Week: Round One appeared first on Sporting Limerick.