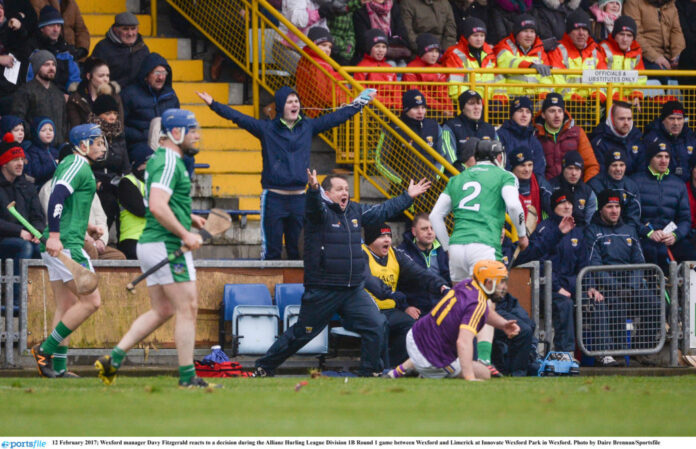 2012 would provide a win against London in the National Football League.

In his first competitive game in charge, a second half lapse saw John Kiely’s hurlers lose out to Wexford 1-14 to 0-14 in the opening round of the League.

Kiely’s side hit the ground running and hit the first three scores of the day in Wexford. This lead was 0-7 to 0-2 after fifteen with Peter Casey grabbing a couple.

At the half, Limerick seemed comfortable at 0-10 to 0-4 having played with the aid of the conditions.

Gearoid Hegarty had the opening score of the second period but slowly Wexford crept back into the game.

Limerick led by four when David Dempsey was fouled in the goalmouth area but instead of being awarded a penalty, the ref deemed there to be no foul as Wexford seized the initiative.

Lee Chin would level with a quarter of an hour to play at 0-12 all before Podge Doran pulled them in front.

Conor McDonald’s goal pushed them further ahead as they moved five clear.

Dempsey was again fouled close to goal but it was adjudged to have taken place outside the penalty area as two late points weren’t enough for Limerick.

Billy Lee’s footballers suffered a second consecutive loss as they fell to a 1-18 to 0-12 defeat at the hands of Westmeath in the Gaelic Grounds.

The away side were quickest out of the block and had the opening three scores of the day with Brian Fanning then getting Limerick on the scoreboard.

But with fiteen minutes on the clock, Ger Egan converted a penalty for Westmeath as John Egan stretched the gap to six.

Limerick rallied and two from Danny Neville and efforts from Darragh Treacy and Jamie Lee reduced the gap prior to the break.

But Westmeath would find three of the final four scores of the first half to give them a 1-8 to 0-6 lead at the interval.

The Leinster side had the gap out to eight shortly after the restart but a run of scores from Lee, Brian O’Donovan and Seamus O’Carroll halved the gap heading into the final quarter.

But that would be as close as they got as Westmeath eased to a nine-point win as they were eventually promoted to Division 3.

Limerick were made to work for their 1-13 to 1-7 win over London in the second round of the National Football League.

Limerick’s cause was greatly helped by the sending off of Lorcan Mulvey after just four minutes in the Gaelic Grounds.

London did have the games opening goal through Padraig McGoldrick and were level at 0-7 to 1-4 heading into the dressing rooms as Limerick failed to take advantage of their numerical supremecy.

But Ian Ryan would help pull Limerick clear with the St Senans man firing into the net in the second half as he finsihed with a personal tally of 1-6 (0-2f).

Eoghan O’Connor and Ger Collins would combine for 0-5 between them as Limerick picked up a second successive win to start their Division 4 campaign.

The post On This Day: Losing starts for Kiely and Lee in 2017 & Footballers win against London in ’12 appeared first on Sporting Limerick.