Home Sport Gaa On This Day: Mixed results for the Hurlers as UL claim Fitzgibbon... 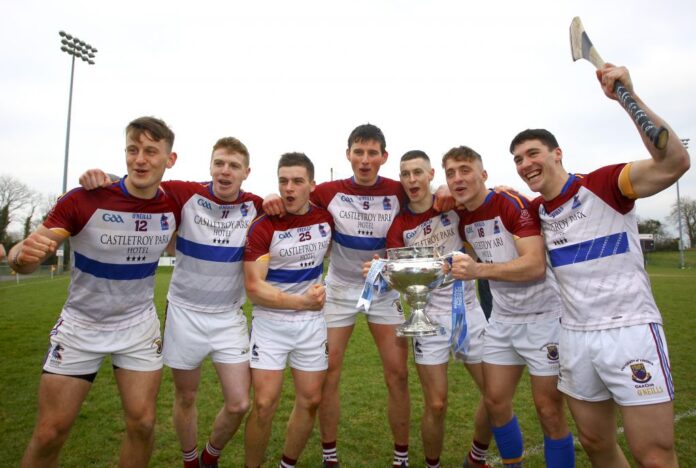 On this day two years ago, Limerick fell to Cork in the National Hurling League but picked up a win over Antrim six years previously.

Also on this day in 2018, UL claimed the Fitzgibbon Cup with nine Limerick players featuring in the decider.

Limerick fell to their first defeat in eight months with a 2-21 to 1-21 defeat at the hands of Cork in the Gaelic Grounds.

A lacklustre Limerick side started poorly and Patrick Horgan’s goal gave Cork a 1-4 to 0-1 advantage.

After 25 minutes, that lead was out to 1-10 to 0-4 as Cork looked poised to run away with the game. But Peter Casey would give Limerick a lifeline with a brilliantly taken goal and at half time, the deficit was 1-13 to 1-7.

Limerick had the first four of the second half but gifted Cork a goal as Conor Lehane restored their seven point advantage.

Limerick had six of the next seven to leave it at 2-16 to 1-17 in the Gaelic Grounds approaching the final ten minutes.

Horgan would uncharacteristically miss a free which allowed Limerick the chance to level with Casey and Diarmaid Byrnes taking full advantage.

Cork had their first score in fifteen to move back ahead and from here to were able to keep a spirited Limerick at arms length to pick up the valuable win.

A star studded Univeristy of Limerick side claimed the Fitzgbbon Cup with a 2-21 to 2-15 win over UCD in Mallow.

In total there were nine Limerick men involved in the win with a couple more unused subs on the day.

Gary Kirby’s side were pre-match favourites and led 0-4 to 0-1 early on. But the Dublin college were level inside 15 minutes and took the lead shortly after with Patrick Curran goaling from the penalty spot.

UL would retake the lead prior to the half with Jason Forde grabbing their first goal as they held a 1-11 to 1-9 advantage at the break.

Ten minutes later, Pat Ryan put the game beyond doubt as his goal made it 2-19 to 1-13 with seven to play.

DCU grabbed a second goal late on but it was too little too late for the Dublin college.

Limerick were made to work for a 1-19 to 0-19 win over Antrim in the Gaelic Grounds.

The Saffrons were full value for an early lead as they dominated proceedings at the Ennis Road. Within the opening 25 minutes they were 0-11 to 0-5 to the good and were five ahead by the half-time whistle.

Antrim had the first score of the second half but three on the bounce from the hosts seemed to take the wind out of their sails as the Saffrons only added three from play in the entirety of the second 35.

Nonetheless, Limerick wouldn’t hit the lead until the 56th minute as David Breen bagged the games only goal to push Limerick two clear after Declan Hannon had the deficit down to one.

Antrim responded with a score but four in a row from Hannon, Paul Browne, James Ryan and Seamus Hickey moved Limerick clear as they held out for an opening day win.

The post On This Day: Mixed results for the Hurlers as UL claim Fitzgibbon Cup honours appeared first on Sporting Limerick.