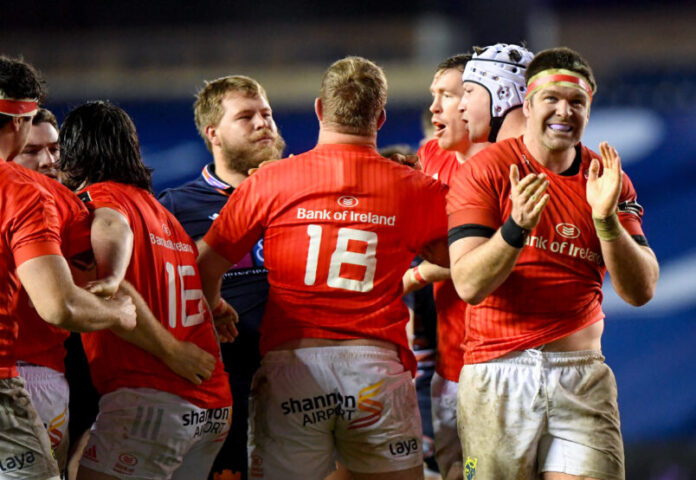 MUNSTER forwards coach Graham Rowntree will be a happy man around UL this week following his side’s destructive and accurate display away to Edinburgh on Saturday evening.

Munster ran out as 22-10 winners at Murrayfield thanks to tries from Jack O’Donoghue, Craig Casey and Gavin Coombes. In miserable conditions it was important for the Munster forwards to set a strong platform and they certainly did not disappoint. With 100 percent lineout accuracy, 99 percent ruck completion and 6/7 scrums won as well as one scrum against the head, the men in red impressed in most departments and in the end were unfortunate to come away without a bonus point.

It was one of the best performances from the Munster pack this season that suggested a very promising climax to the campaign could await. After January’s lineout malfunction against Leinster there were fears that opposition could learn a thing or two from the champions and cause Munster issues down the line. Since then Munster have instead gone from strength to strength bringing an efficient edge to everything that they do. Discipline could be improved and has swung momentum against Munster on occasion, but the fundamentals are certainly as polished as they have been in quite some time.

To put it simply, Graham Rowntree has British and Irish Lions forwards coach top of his CV for a reason.

Munster’s scrum was central to this important win on the road. Although solid this season, the scrum has seldom been spoken about as a weapon of this Munster team. On Saturday Munster recovered from conceding an early scrum penalty to win the next six of their own put ins and one Edinburgh ball against the head.

Starting in the front row were James Cronin, Niall Scannell and John Ryan. The trio are arguably Munster’s finest scrummaging combination and it was their efforts that helped the visitors to the game’s opening try.

The clip above encapsulates everything positive about the Munster display. A strong launch pad is essential before ever thinking about attacking game plans and Munster nailed that area. The appetite for relentless and brutish ball-carrying complements the scrum beautifully and inspired outings from Jack O’Donoghue and Gavin Coombes led the red wave.

Gavin Coombes is a brilliant ball-carrier to have from the base of the scrum and just as the forwards began to get the shove on, the 23 year-old number eight broke away to bring Munster within inches of the paint.

The carries come thick and fast, the clear-outs are rapid and eventually O’Donoghue bundles his way over to write his name on the scoresheet.

The Munster lineout was even more accurate, enjoying a 100% completion rate. Niall Scannell and substitute Kevin O’Byrne threw perfectly in horrific conditions. Choreographing the lineout on his 240th appearance was the ever-green Billy Holland and the 35 year-old richly deserved his man of the match award having been at the core of a tremendous evening for the forwards.

The value of having a firing lineout is seen above as Munster work a pre-planned move. Scannell rushes to peel around the back of the set-up and unleash crashing first centre Damian De Allende into the Edinburgh 22. Munster win a penalty for their endeavours and could badly do with replicating that kind of form against the elite teams in Europe.

Openside flanker Chris Cloete had a brilliant game as he was afforded a free role to poach and slow opposition possession throughout. Cloete is averaging a turnover every 26 minutes this season and the South African was a significant help to the defensive set-up as he allowed fellow forwards extra time to get up from the tackle zone and realign effectively.

The organization and communication seen in the Munster defence lately has been top drawer but the basic determination and will to fight for every inch is proving just as important. There is nothing too innovative about the Munster defensive structure yet the work-rate of the pack to get off the ground and make hits close to the ruck is doing just the trick. It has not been uncommon to see Munster block out opposition on their own goal line for minutes on end before winning key turnover penalties and that of course is something that is pleasing defence coach JP Ferreira.

“We had a three minute block on our goal line where we kept them out,” said Ferreira yesterday. “It’s massive for us when after three minutes of defending on our own goal line we get a penalty or a free-kick – it just lifts everyone.

“I thought towards the end of the game, the last seven and a half minutes saw our best defensive efforts. That’s just because we were going after the ball and trying to get that bonus-point. It’s coming together nicely but it’s another test at the weekend and hopefully we can just crack on from where we left off.”

There is a character developing about this current Munster team. We can attribute words like ‘brave’, ‘determined’ or ‘relentless’ to any side of the province’s history but such qualities aren’t always as obviously prominent. With a young squad being nurtured by leaders like Billy Holland, Peter O’Mahony and Keith Earls as well as world renowned coaches such as Johann Van Graan, Graham Rowntree and Stephen Larkham, this a great opportunity to harness an elite mentality into an already hard-working and talented crop of players.

The business end of the season awaits and from what we’ve seen so far, Munster could just elevate to new levels at the best time possible. Add Conor Murray, Peter O’Mahony and CJ Stander to the current team with a sprinkle of Joey Carbery magic and it won’t be long before the likes of Racing 92, Exeter Chiefs and Leinster will sit up and take notice.

Up next for Munster are Cardiff Blues on Friday night (8pm KO live on Eir Sport 1) where everybody involved will be hoping for a similarly professional performance.