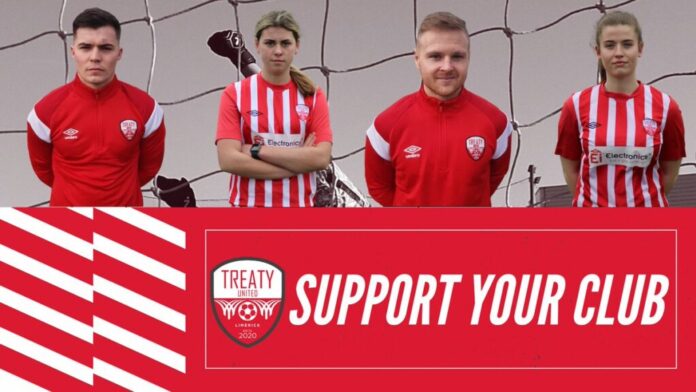 TREATY United FC has today launched an exciting new fan membership scheme for 2021. The club is busy preparing for the start of the League of Ireland season for the first time and for their second season in the Women’s National league.

They have announced a new fundraising initiative where, for less than €1 a day, fans can directly contribute to the club by signing up to a new fan membership scheme. It will go on sale this Friday at 9am on the club’s new website.

Treaty United Chairman, Conn Murray commented “At Treaty United our objective is simple, it’s to build a leading community-based football club that will restore Limerick and the mid-west as proud members of the League of Ireland. We’re a not-for-profit club which is rooted in the community and we need the support of fans all across the mid-west and beyond if together we’re to make this happen. The response so far from people has been brilliant and we need to turn that into financial support now to help us grow.

The new fan membership scheme launched today will include for fans:

Concluding, Conn Murray said “Unfortunately we can’t welcome fans to the Markets Field yet so fundraising initiatives like this are more important than ever. This fan membership is tthe next best thing to being there on match night and free streaming access to all of our games will allow supporters to watch all the on-field action. We’re on an exciting journey with Treaty United and we want everybody with an interest in soccer here to join us and play their part.

Full details will be announced on the club’s website treatyunitedfc.com on Friday morning.