Home Sport Soccer Treaty Finish Pre-Season on a high ahead of Opening Day Clash with... 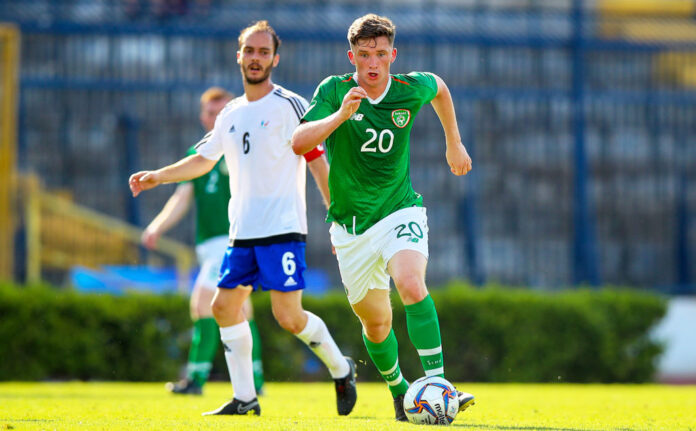 TREATY United finished off a swift pre-season with a 2-1 victory over Athlone Town at the Markets Field yesterday. The game was streamed live on our Youtube, Facebook and Twitter channels and you can watch it back here; Treaty United FC v Athlone Town AFC – YouTube

All the goals came in an entertaining first half with former Regional duo Sean McSweeney and Clyde O’Connell giving the home side a 2-0 lead before Kurtis Byrne pulled one back from the penalty spot.

When both sides met last weekend, there was a noticeable lack of intensity which wasn’t helped by the volume of changes Treaty United made in the second period.

The beginning of this encounter was different and Tommy Barrett’s outfit took the lead after just six minutes when Athlone failed to clear a corner and the ball was retrieved at the back post by captain Jack Lynch who in turn found McSweeney who swiveled and arrowed a powerful shot beyond Schlingermann into the corner of the net.

As has been well documented, it will be a big season for McSweeney who Treaty will be counting on for both goals and assists from his ‘no.10’ role in the side and it was a confidence boosting start for the Foynes native.

Barrett sprung a slight surprise with the line-up when he named both Clyde O’Connell and Lynch in midfield as both were expected to form the centre-back pairing at the beginning of the competitive campaign at least.

It was the former who proved his worth in the role as he supported the attack and was fed by Marc Ludden before coolly slotting under Schlingermann with his weaker right foot.

A lapse in concentration provided an underperforming Athlone side with an opportunity to get back into the game as a reverse pass from Jamie Hollywood invited an ill-advised lunge from Lynch in an attempt to prevent the ball reaching Tristan Noack-Hoffman but the former Galway man caught the player in the area and referee Kevin O’Sullivan immediately pointed to the penalty spot. Kurtis Byrne converted the penalty despite the best efforts of Tadgh Ryan.

The second half proved to be a tough affair for the home side as Adrian Carberry’s team upped the tempo significantly. A number of issues including a drop in aggression and intensity from Treaty contributed to the change and Byrne and Barnes came close to equalising.

One aspect of the game that will please Barrett is that despite the level of pressure his side were under for the majority of the second half, they showed resilience and desire in defence. On a number of occasions it looked like the visitors were certain to equalise but a number of bodies appeared to block shots on goal and preserve the lead.

One aspect that will worry Barrett is the current difference in quality between the first 11 and substitutes. There is no doubting that given time, a number of the squad may improve but at the moment if injuries occur to the likes of Lynch, O’Connell or McSweeney, there is a significant drop in quality to the replacements for those positions.

In saying that, we have yet to see Conor Melody or Joe Collins in action yet as they fight their way back from injury. Dean George did not feature this weekend but will be expected to lead the line against Bray. Kieran Hanlon has been one of a number of players undertaking an intensive individual training regime to regain the level of fitness required but along with Matt McKevitt, both players are a few weeks away from full fitness yet.

It looks as though the opening game of the season will take place at the Carlisle Grounds next Sunday at 3pm but we are awaiting official confirmation from the FAI and both clubs.

The post Treaty Finish Pre-Season on a high ahead of Opening Day Clash with Bray appeared first on Sporting Limerick.