Seven years ago, the hurlers concluded the group stage of the league with a win over Laois in O’Connor Park while the U21 footballers fell to a classy Kerry side in the Munster semi-final in 2011.

Limerick concluded the group stage of the 2014 National Hurling League Division 1B with a hard-fought 1-17 to 1-13 win over Laois in O’Connor Park.

The hosts dominated the opening half and despite nine first half wides, were full value for a seven point lead at the interval.

In the 25th minute they grabbed the first goal of the game with Tommy Fitzgerald netting to leave it at 1-9 to 0-5 in their favour heading into the dressing rooms.

Limerick regrouped in the second scoring four of the first five on the resumption but a double from the Purcell brothers Paddy and John had their lead at six with 20 to play.

But when substitute Shane Dowling struck for goal after 62 minutes, the deficit was back down to one as Laois ran out of steam.

Dowling pointed Limerick ahead shortly after and further scores from Dowling and David Reidy sealed the round five win.

Limerick were paired with Galway in the quarter-finals the following week.

A star studded Kerry U21 team were comfortable 3-15 to 2-6 winners over Limerick in the Munster semi-final at the Gaelic Grounds.

James O’Donoghue, who would go on to win the Footballer of the Year award just three years later, opened the goalscoring for the Kingdom as he finished with a personal tally of 1-4.

Despite this, an Eoghan O’Connor penalty just before the short whistle had Limerick within striking distance at the break as they trailed by just 1-6 to 1-4.

However, the Kingdom flexed their muscles in the second half with Paul Geaney the star of the show. The Dingle man grabbed a pair of goals and added three points as Kerry pulled away from their hosts.

Limerick captain, Donagh Kelly, did grab a consolation goal for Limerick but it was all one way traffic as Geaney, O’Donoghue and Barry John Walsh kicked 2-12 between them.

The post On This Day: 2014 Hurlers prove too strong for Laois & the U21 footballers fall to Kerry in 11′ appeared first on Sporting Limerick. 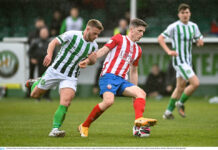