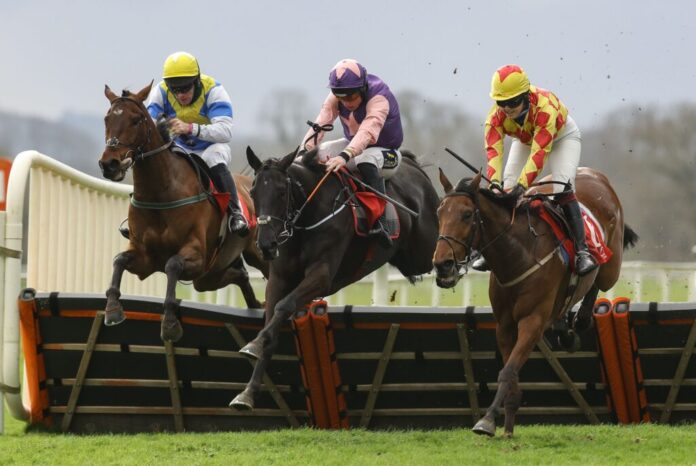 Shannon trainer Michael McDonogh began and ended the week with winners at Navan on Monday and a little closer to home on Sunday. He won the opening division of the two-mile maiden hurdle at the County Meath venue with 5/2 favourite Nazine. In the trainer’s own colours, the four-year-old led at the fourth last flight under Barry Browne and made the best of his way home to win by five and a half lengths from the Tom Mullins-trained Toughari.

McDonogh and Browne again combined to win the first leg of the two-mile and three-furlong maiden hurdle at Limerick on Sunday with Castle Town House, another of the trainer’s own horses. The six-year-old was sent off at odds of 4/7 favourite but was booked for second place behind the Eoghan O’Grady-trained Whiskeywealth until that rival fell when clear over the final hurdle. Castle Town House was hampered by the faller but recovered to beat the Eamonn Sheehy-trained Collo Meo by four lengths.

At Clonmel the following afternoon, Donie McInerney and trainer Liam Burke combined to win the maiden hurdle with the David Murphy-owned First Touch. The 13/2 chance outbattled the Roger McGrath-trained More Wine Lilly to win by half a length.

Dreamsrmadeofthis was up to making a winning debut in the fillies’ maiden hurdle for trainer Enda Bolger and owner JP McManus at Cork on Thursday. With Mark Walsh in the saddle, the 6/1 chance scored a comfortable four and a half-length win over the Tony Mullins-trained 15/8 favourite Fraternity and is clearly held in some regard. Bolger said, “Hopefully we will hear more of her. Obviously we are learning all the time but you’d have to be mad about that.”

Askeaton trainer Patrick Neville won the opening division of the two and a half-mile maiden hurdle with 6/1 chance Glentruan. In the colours of the In For The Fun Syndicate, the 6/1 chance readily got the better of the Denise Foster-trained 6/5 favourite The Greek by two and a quarter lengths under Newcastlewest conditional rider Gary Noonan.

Neville’s neighbour Davy Fitzgerald won the qualified riders’ handicap hurdle with the Belinda O’Brien-owned Hilltop Supreme. A second winner for Rochelle Murphy, the 9/1 chance beat the Denise Foster-trained Fierami by a length to complete a remarkable four-timer for the nine-year-old.

Ballingarry-based Richard O’Brien was among the winners at Dundalk on Friday night where 9/1 chance Irish Acclaim landed the six-furlong handicap under County Kildare apprentice Scott McCullagh. In the colours of the Kingdom Thoroughbred Syndicate, the four-year-old came from well off the pace to beat the Ado McGuinness-trained Eglish by a length and a quarter. O’Brien said, “Scott is terrific on him and that’s his third win on him this winter. Also a big thank you to the Kingdom Syndicate. John Culloty picked this lad out and we are having a great time with him. We’ll give him a little bit of a chance to recover from his winter exertions and then find something nice for him on the grass.” The trainer was denied a double as his Eloso just lose out by a short-head in a thrilling conclusion to the night’s finale. Billy Lee’s mount was piped at the line by the Colin Keane-ridden Betrayed which was completing a double for Ado McGuinness and it was a result that could have gone either way.

Chris Hayes took the finale at Navan on Saturday where Duchess Ravenwaves ran out an easy winner of the second leg of the 13-furlong handicap. Trained by Gavin Cromwell, the Peter Michael-owned seven-year-old was clear over a furlong and a half out and came home a six-length winner from the John McConnell-trained Room To Roam at odds of 9/2.

Enda Bolger sent out another winner at Limerick on Sunday where he helped Listowel conditional ride Tom Kelly complete the first double of his career. Kelly took the handicap chase on Midnight Maestro, the horse that gave him the first winner of his career at Leopardstown’s Christmas meeting. Never far off the lead and jumping well throughout, the 17/2 chance eased clear from the final fence to beat Henry de Bromhead’s Game Of War by an easy five and a half lengths for owner JP McManus. Athea-based Eoin McCarthy had given Kelly an earlier success as Cosmic Rock landed the opportunity handicap hurdle for owner Anthony Carey. Kelly brought the 14/1 chance from off the pace and the partnership got up in the dying strides to pip the I Don’t Get It by three-parts of a length.

Kildare jockey David Egan landed his first Group 1 success when partnering Mishriff to success in the Longines Dubai Sheema Classic at Meydan on Saturday. Successful in the Saudi Cup, the world’s richest race, in Riyadh only last month, Egan enjoyed another huge payday as the John Gosden-trained four-year-old got the better of the Japanese-trained 2/1 chance Chrono Genesis by a neck with Aidan O’Brien’s Mogul, the 7/4 favourite, back in seventh place. Egan said, “I’m just thankful to everyone around me for putting me in the position to be able to ride such a champion in Mishriff. He’s so versatile, he can run over any trip on any surface. Any trip for Mishriff, he’s taken it all in his stride. So we’ll take on any trip, and any horse.

“Coming off the Saudi Cup win, maybe some would say the pressure was more immense because he had more of a chance and he’s stepping up against top-class horses here. But I felt pretty cool, which I probably needed to be, to get him to relax and switch off in the first half of the race.”