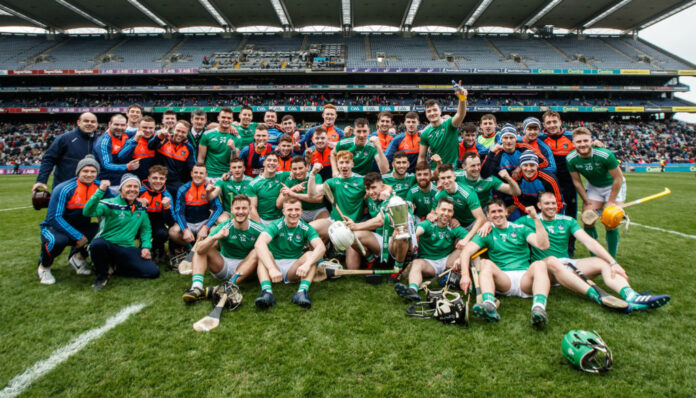 On this day two years ago, Limerick won a first National League title since 1997 as they beat Waterford 1-24 to 0-19 in Corke Park.

Reigning All-Ireland champions Limerick proved too strong for Waterford as they claimed a first League title in 22 years after a 1-24 to 0-19 victory in Croke Park.

After spending almost a decade in the second tier, Limerick showed their class in their first campaign back in 1A, topping their group before disposing of Laois and Dublin to set up a final clash with 1B winners Waterford.

And the form teams of the Spring split the opening four scores in a quick start in GAA HQ.

Limerick then got into their stride and five points on the bounce had them cruising at 0-7 to 0-2 after 12 minutes.

Waterford rallied and had the gap back to 0-8 to 0-6 midway through the first half.

There was just a point between the sides in the 26th minute when a moment of Aaron Gillane magic sprung Limerick four clear.

Waterford did hit the next two scores but three in a row from Limerick had them comfortable 1-12 to 0-10 at the short whistle.

The sides exchanged scores on the restart but Limerick’s lead was out to 8 after Declan Hannon’s 44th minute strike.

Three in a row followed from Waterford but that was as close as they got as Limerick eased to the League title.

Tipperary needed extra-time to see off Limerick 2-31 to 1-31 in an absorbing National League semi-final in Thurles.

Tipp had the first two scores of the game but were soon pegged back by Limerick with the early exchanges a sign of thigs to come.

After finding themselves level at 0-4 apiece in the 17th minute, four consecutive Tipp scores gave the home side a cushion.

By the half hour, the gap was still four but scores from Kyle Hayes (2), Seamus Flanagan and Aaron Gillane had things all square.

Points from Ronan Maher and Michael Breen prior to the whistle gave them a two point advantage at the interval.

Jason Forde had a couple to start the half but three from Limerick brought it back to a one point game.

Tipp replied with four of their own but Limerick weren’t found wanting. Six of the next seven scores came from John Kiely’s men as Pat Ryan drew the teams level after 56 minutes.

Again Tipp were able to move four points clear, the highlight a sideline from the halfway line from Ronan Maher.

But the Limerick response was again emphatic and scores from Graeme Mulcahy, Cian Lynch (2) and Tom Morrissey sent the game to extra time after finishing 0-26 apiece.

A mistake in extra-time from the ever reliant Nickie Quaid handed Jason Forde a goal and the Silvermines man doubled his tally shortly after to help Tipp into a commanding 2-28 to 0-29 lead at the half in ET.

A brilliant Graeme Mulcahy goal in the second period ignited Limerick and David Reidy brought them within a score with three minutes to play.

Yet, they could not find the levelling score as Tipp moved into the League final.

Teh sides would meet in the championship just a couple of months later.