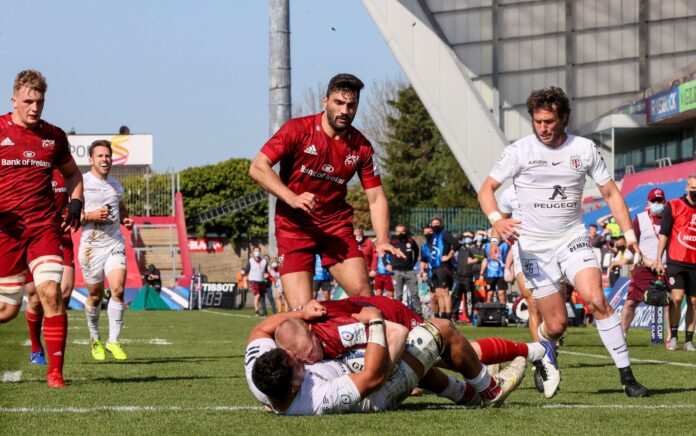 SO often after league final disappointment players head away on a much-deserved holiday for the Summer. Although sunshine lit up Thomond Park this afternoon there was to be no such down-time for Munster.

Last weekend’s 16-6 defeat to Leinster stung the men in red. Johann Van Graan, Stephen Larkham and Niall Scannell all spoke of their deep disappointment following the PRO14 Final at the RDS and were more than aware that they were going to need to bounce back in style to stand a chance against Top 14 giants Toulouse.

There is world class talent among the French side’s ranks. World Cup winners Jerome Kaino and Cheslin Kolbe stand out but Les Bleus superstars Antoine Dupont and Romain Ntmack are also elite operators. Many people wrote off Munster and head coach Van Graan without doubt would have been determined to prove a point.

They needed to respond well and for forty minutes they did it. The big names stood up, the team played with a combination of creativity and industry and at times bossed Toulouse in the first half.

Toulouse showed their class right from the first whistle as a series of offloads immediately helped them into the Munster 22. Munster found themselves on the ropes immediately as the Toulouse backline strutted their stuff. In the end Munster were content to concede three points from the boot of Ntamack when it could have been much worse.

Munster gathered themselves together well and constructed some decent phases of play inside the visitors’ half. Keith Earls, Joey Carbery, Mike Haley and Gavin Coombes got their hands on the ball with regularity as Van Graan’s side looked to inject some tmepo into proceedings. A silly penalty allowed Carbery to draw Munster level level after 14 minutes.

His halfback partner Antoine Dupont may have grabbed most of the headlines during the Six Nations but 21 year-old Romain Ntamack was the player to light up the first half. The outhalf was instrumental in Toulouse’s best attacking play and again sliced through Munster’s defence to get his side deep into Munster territory.

But Munster have superstars of their own. One man that you can always rely on when you need him most is Keith Earls. With performances like the one he put in today the 33 year-old would be fully deserving of a second Lion’s tour this Summer.

Munster’s attack looked to be on another level than last week throughout the first half and Earls was at the heart of everything his side strung together. World Cup winner Damien De Allende put in his finest performance for Munster to date but his Springbok teammate Chelsin Kilbe could do nothing to stop the Moyross man out wide on the wing.

De Allende built up a head of steam as Munster spread the ball to the left-hand side, drew two defenders and fed Keith Earls who did incredibly well to see his way past scrambling defenders and dot down. Munster meant business and there is no better man around to inspire an attacking performance.

Munster’s second try came just three minutes later in the 27th minute thanks to some stunning work from the same two players. South African bruiser De Allende showed his acceleration to burst through the centre of the Toulouse defence. Munster forwards like Jack O’Donoghue, Gavin Coombes and Tadhg Beirne put in tireless performances and they were again on hand to support their teammate inside the Toulouse 22.

Munster hammered the Toulouse goal-line just beneath the posts to quickly work an overlap for Earls to exploit on the left wing. Conor Murray will be pleased with his day’s work at the base of the ruck and the two-time Lion showed good awareness to launch a looping skip-pass into the grasp of the experienced Earls. The two sides exchanged a penalty each before the half-time whistle but Munster were the happiest of the two sides after forty minutes, leading 16-9.

Unfortunately from a Munster point of view, Toulouse started the second half exactly like they did the first. Romain Ntamack was certainly in the running for the man of the match award and his cross-kick in the 42nd minute was put on a plate for left-winger Matthis Lebel. The France prodigy converted beautifully from the corner to leave the sides deadlocked at 16-6 .

Munster were dissapointed with their defence and the reply came soon after. Johann Van Graan’s troops worked their way into the Toulouse 22 where they attacked ferociously. The away team were pinged by referee Wayne Barnes for not rolling away and most would have expected CJ Stander to point to the posts for three points. However, Munster have a dangerous weapon up their sleeve in the sizable shape of Gavin Coombes. Five metres from the line Munster decided to tap-and-go and the 23 year-old Bandon bruiser bulldozed his way over to regain Munster’s lead. Two 6’10 second rows, two All Blacks and a pack of seasoned internationals – no problem for the unstoppable blindside flanker.

Munster finished the first half with all of the momentum in their favour but this fast became a ding-dong battle in the second half. Munster’s defence has been exceptional all season but Toulouse responded strongly to make considerable inroads in red territory. On 55 minutes hooker Julian Marchand broke his way through the Munster defence to draw the scores level once again.

Keith Earls’ influence continued in the second half and Munster can definitely feel aggrieved by referee Barnes for denying the home team a fourth try. With advantage being played, Munster spread the ball from right to left where the magnificent Earls threw a miraculous pass between his legs into the path of Andrew Conway. Conway collected the bouncing ball to touch down but Barnes adjudged the ball to have gone forwards. Instead Munster had to settle for three points and that came as no consolation when Toulouse hit back immediately after.

Everybody is aware of Toulouse’s counter-attacking threat and with 68 minutes played Lebel and Kolbe connected impressively down the left wing to strike through Munster. Hanrahan will have been dissapointed to have missed an easy tackle and as a result to the door was opened for Anotine Dupont to fly through the middle of the park and dot down. Dupont has proven himself as one of the world’s most intelligent support players in recent season and applied his trademark move at the expense of Munster’s European Cup dreams on this occasion.

Ten minutes left on the clock and more Munster magic was required at Thomond Park to save the season. When Ntamack extended Toulouse’s lead to seven points with five minutes remaining – nothing less than a miracle was going to suffice. Three minutes left to go and Antoine Dupont got on the end of a series of Toulouse offloads to put the result beyond any doubt. As Munster tired, Toulouse turned it up a notch. The scoreboard read Munster 26-40 Toulouse as Munster desperately ignited a rally in the final minutes.

To their credit, Gavin Coombes added a late consolation to leave the full-time score at Munster 33-40. Not the Champions Cup send-off CJ Stander, Billy Holland or JJ Hanrahan wanted but still a performance to be proud of.