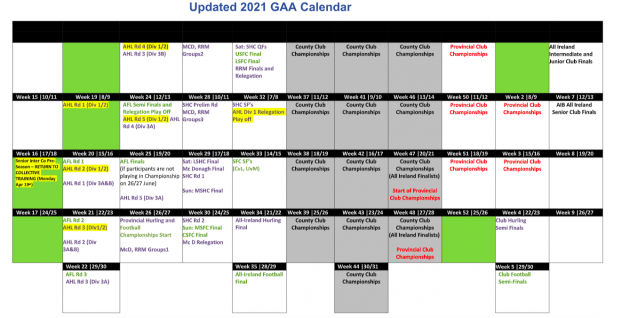 HUGE news this evening as the GAA has unveiled the 2021 Masters Fixtures Plan for the club and county season.

The Allianz Hurling League will start on the 8/9th of May and each county will play at least five matches this Summer.

The Munster championship will start on the 26/27th of June and there will also be a backdoor for beaten teams in the competition.

The All-Ireland hurling final has been scheduled for the 21st or 22nd of August.

Inter-county football is set to return on the 15/16th of May with a minimum of four matches for every county. The provincial football championships will start on the 26/27th of June with a straight knock-out format in place. The All-Ireland football final is penciled in for the 28/29th of August 2021.

It has also been announced that club championships can start once the county has already been eliminated from the championship. The regular club season is expected to conclude on the 15/16th of January with the final set for the 12/13th of February 2022.