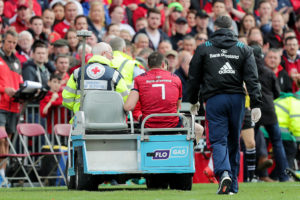 MUNSTER and Ireland flanker Tommy O’Donnell has this afternoon announced his retirement from professional rugby.

33 year-old O’Donnell made his Munster debut in September 2007 against Scarlets and went on to make 186 appearances for the province. The Cahir native played a key role in some of Munster’s most famous nights including the 2010 victory against Australia and 2016’s victory over the Maori All Blacks when he captained the team.

O’Donnell also has 13 Ireland caps and helped his country to two Six Nations Championships under the guidance of Joe Schmidt. The backrower sadly missed out on the 2015 World Cup due to injury but bounced back to play a key role for Munster and Rassie Erasmus the following year.

Injury issues have hampered O’Donnell in recent years with the likes of Jack O’Donoghue, Chris Cloete and Gavin Coombes being preferred by Johann Van Graan in the backrow. However, Tommy will be remembered as a magnificent servant for the province who consistently set standards throughout his 14 season career.