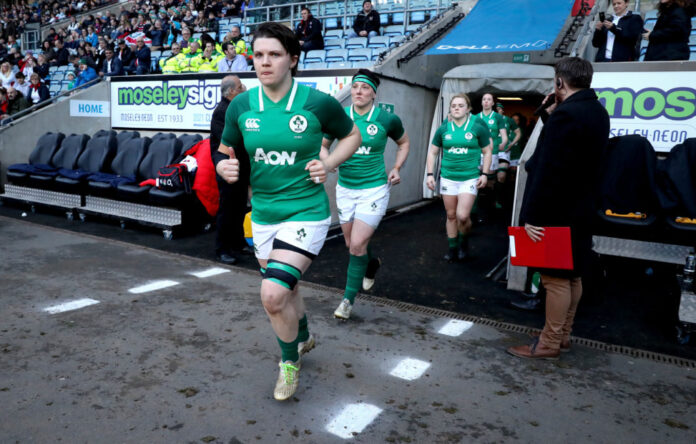 IRELAND were comfortable 45-0 winners over Wales in their Women’s Six Nations opener at the Cardiff Arms Park on Saturday afternoon.

Ul Bohs’ Eimear Considine bagged a brace of tries inside the opening 20 minutes, as did Beibhinn Parsons as the away side secured the bonus point early.

Sene Naoupu crossed for a fifth try before half-time at Cardiff Arms Park.

Dorothy Wall got Ireland’s sixth before Hannah Tyrrell dotted down as the clock ticked red to wrap up a 45-0 victory.

Speaking after the game, Irish captain Ciara Griffin utlined that the squad were looking for a quick start after a lengthy lay off from competitve action.

“That’s been our focus for the last few weeks, building up. We want to start quick, start fast and just play to our tempo. Put our stamp on the game. Credit to everyone out there.

“Everyone knew their role, everyone executed. You could see there was a real hunger in the group. That just gave us that platform to play that attacking style of rugby for that first half and the rest of the game.

“We were confident in ourselves as a group, in terms of the work we’ve done in camps and at training. We’ve pushed ourselves to a different intensity level and that showed out there today in terms of fitness and work-rate around the ball and everything.

“It gave us that good platform to work off. We train so hard because we want to play in the green jersey. Every chance you get to play, you’re going to relish it. I think that really stood out there today.

“Everyone put their best foot forward and you could see there were smiles on the faces. That’s what you want when you go out to that whitewash and it was an enjoyable day.”

Up next for Ireland is a clash with France on Saturday at Energia Park. The French were 53-0 winners over Wales in Round 1.