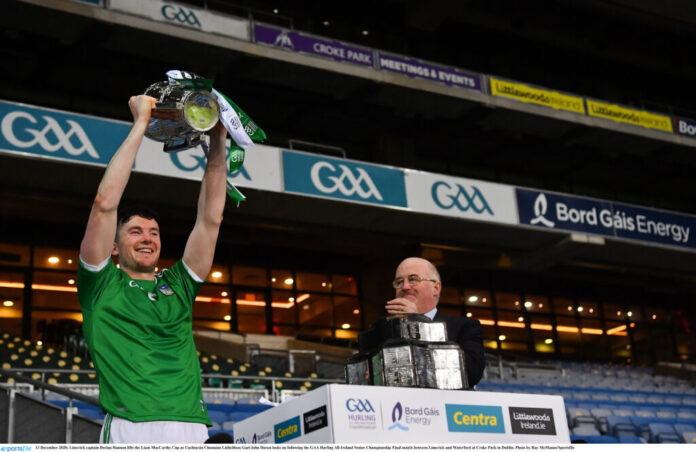 JUST under four months since they were crowned All-Ireland champions for the second time in three years, the Limerick hurlers will make their return to competitive action on the weekend of May 8/9 as the National Hurling League kicks off.

The following week, Billy Lee’s footballers will return to the playing field with the start of the National Football League.

The hurlers begin the year with every piece of silverware at their disposal and a huge target on their back. But, like it was in 2020, the truncated nature of the intercounty calendar could prove hugely beneficial to the team.

John Kiely’s side are rightly lauded as the exceptional team in Ireland and have improved each year since his introduction in 2017.

Were it not for a calamitous fifteen minutes against Kilkenny in the 2019 All-Ireland semi-final, there is every reason to believe that Limerick could be current three-in-a-row champions.

Not only have Limerick the premier XV at their disposal, as indicated by their record equalling haul of 9 All-Stars, but they also have an unmatched bench.

There are a number of players who are unlikely to breach Kiely’s starting line-up but would be bona fide stars for other counties.

One of Barry Nash or Richie English is likely to be left in reserve this summer with both All-Star nominees and the latter winning the award in 2018.

Peter Casey was nominated for the individual prize in 2019 but was left to figure from the bench for much of 2020.

It is far from hyperbole to say that Pat Ryan, Paddy O’Loughlin, David Reidy, David Dempsey and Adrian Breen, to name a few, would all be confident of starting for every other county in the country.

And in a truncated season, this strength in depth could be the decisive factor if Limerick are to retain their title.

Twelve players started each of those games and showed little sign of fatigue in their march to honours.

But with the added exertion of the league to contend with, Kiely’s squad depth will be crucial.

As defending back-to-back champions, Limerick will of course be keen to make that a trio of triumphs after a nineteen year wait for one.

But the priority will no doubt be the championship as seek to become the first Limerick side to retain the Liam MacCarthy cup.

The opportunity to rest irreplacables like Sean Finn, Cian Lynch and Aaron Gillane will be a welcome boost for Kiely and Kinnerk.

Likewise, the opportunity to test the credentials of fringe players cannot be underestimated. As mentioned earlier, there is likely to be a battle between Nash and English for the corner back spot while Mike Casey will also be back in contention.

Kyle Hayes has done it all for his county in every line of the field and must figure in the team, in what position however is yet to be confirmed.

David Dempsey will be gunning for a starting spot after cruelly suffering injury after an inspired league and club campaign in 2020.

The senior set up may be a bit off for Cathal O’Neill and Colin Coughlan but few players will rest easy assured of their position for the coming years.

It will be intriguing to see how John Kiely assembles his jigsaw but with ample games in a shortened period of time, there is no doubt that the Shannonsiders have the required tools to cope better than the rest.