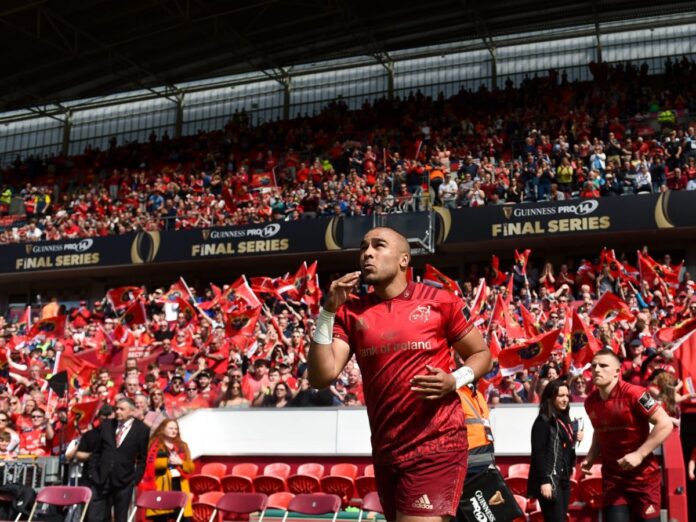 WHEN star quality becomes available at a reasonable price there is only one thing to do.

Simon Zebo has proven himself as one of Europe’s most prolific try scorers for a decade and still only 31, the Corkman has so much left to offer Munster Rugby.

Zebo has evolved his game over the years. The 21 year-old winger that danced his way to a hattrick versus Northampton in 2012 has added aerial dominance and accurate kicking to his try-scoring knack.

Defensively he came on leaps and bounds under Rassie Erasmus and Jacques Nienaber in 2016 and by the 2020 Champions Cup Final in Bristol, Simon Zebo looked like the complete package. That afternoon at Ashton Gate the 35 cap Ireland international started at fullback and scored twice for Racing 92 as they fell to a narrow defeat against Exeter Chiefs in Europe’s showpiece event.

The truth is, although he once divided opinion in Thomond Park, Simon Zebo is one of the elite back three players in Europe. He currently sits just one try behind Brian O’Driscoll in the all-time European Cup try scorer list with 32 tries.

Should he score nine more Champions Cup tries, Zebo will eclipse both Vincent Clerc and Chris Ashton to sit top of the pile. Zebo averaged a try every 2.5 games for Munster last time around meaning he would be on course to claim the competition record after three more seasons in red.

During his Racing career he scored 23 times and made himself not just a fan favourite but also the heartbeat of the dressing room. His energy and enthusiasm is by all accounts as infectious around the training park as it is on match day. He offers the kind of spark that is rare in Irish rugby and it is important to embrace that.

Stephen Larkham is hoping to add an attacking edge to Munster’s play and Zebo will add a huge degree of personality to the province’s game.

An initial one-year Munster contract, co-funded by the IRFU, is a win for all parties. Zebo has his eyes set on the 2023 Rugby World Cup in France but the contribution he can make to his home province in the meantime should be a real source of excitement for supporters.

He enters a team stronger than the one he departed three seasons ago. When Munster kick-off their 2021/2022 campaign, RG Snyman, Joey Carbery and Simon Zebo will feel like a trio of world-class new signings. Johann Van Graan’s men have operated at a high level in recent times and adding some flair to an already top-class physical outfit is a wise move.

Questions have been raised about what this means for fullbacks Mike Haley and Matt Gallagher but everybody will have their part to play. Injuries are always a factor and having a back-three division packed with elite talent is important for Champions Cup hopefuls. Keith Earls, Andrew Conway and Shane Daly bring international quality on the wing where Zebo and Gallagher are also comfortable.

Mike Haley has shown some good form for Munster this season and some people felt for him following the signing of Zebo. The reality is that if he is good enough to retain the fifteen shirt next season, he will. A back three of Zebo, Earls and Haley is still a real possibility, but should he be dropped for proven international talent, it would hardly be a point of controversy.

The modern game requires Munster to make ruthless decisions in order to stand a chance against the likes of Leinster, Exeter Chiefs and the many Top 14 giants. That might sometimes mean recruiting Spingboks like Jason Jenkins at the expense of homegrown talent, but in this case the decision was a whole lot easier.

Zebo is not just a homegrown talent but a world-class talent too. You talk about marquee signings from the southern hemisphere but Cork’s Simon Zebo is as good a signing as you will get.

As proven in Paris, the 31 year-old is good enough to play for any team in the world and we are fortunate to see Munster’s record try-scorer back in Thomond Park for a second term. He is not your traditional Munster winger but someone special who can lift us to the next level.

A younger generation of Munster fan adored Zebo’s personality and individual brilliance between 2010 and 2018. It would only be right for the wider Munster fan base to show him the universal appreciation and affection he deserves this time around.