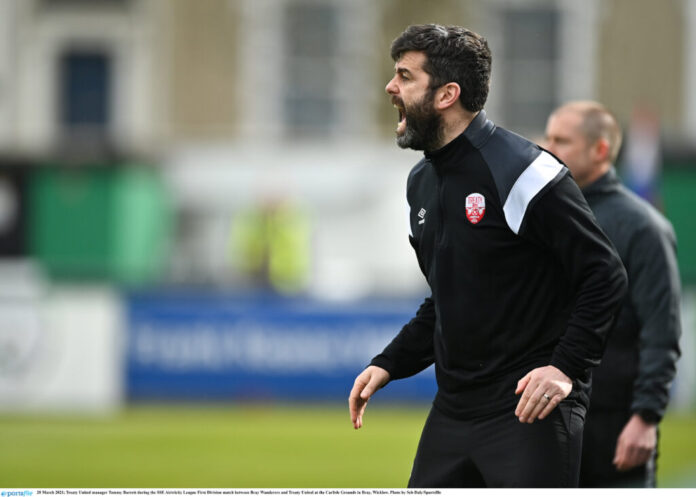 TREATY United extended their unbeaten run to four games when they drew 1-1 with promotion favourites Galway United at Eamon Deacy Park on Friday night. Edward McCarthy opened the scoring for the away side but a last minute Wilson Waweru goal rescued a point for John Caulfield’s men.

It is Treaty’s third draw in four games and they will be disappointed with the manner of the draw having led for 70 minutes.

It took ten minutes for either team to have the opening effort on goal as Ruairi Keating’s shot was easily gathered by Tadgh Ryan. Caulfied ditched his 3-5-2 formation in favour of a 4-1-4-1 style with Shane Duggan playing in front of Conor McCormack who occupied the defensive midfield role.

Kieran Hanlon produced his best display in a Treaty shirt in the first half and the centre-back duo of Killian Brouder and Maurice Nugent struggled to deal with his physicality in the opening exchanges. It was the former Pike Rovers man who forced the first save from Conor Kearns in the Galway goal.

Tommy Barrett’s men played with high energy in the opening period and were very comfortable in possession with Marc Ludden and Joel Coustrain causing problems for Gary Boylan and Shane Doherty on the right.

The first goal of the game arrived from this avenue as Ludden took off on a trademark overlapping run and was fed by Coustrain. The former Galway man produced a brilliant back-post cross and Ed McCarthy superbly headed home to give the away side a deserved lead.

Against a surprisingly lacklustre Galway midfield, the hard working duo of Matt Keane and Mark Walsh comfortable intercepted possession on countless occasions with Sean McSweeney’s distribution improving all the time.

Treaty were forced to make a substitution at half time with Alan Murphy replacing Joel Coustrain who picked up an injury in the first half. Barrett’s charges were comfortably dealing with the threats that the Tribesmen were providing although former Limerick FC captain Shane Duggan did produce a fine strike midway through the second half which was saved well by Ryan.

Substitute Murphy had a massive chance to extend Treaty’s lead as he was sent through by a perfectly waited McSweeney pass and despite a perfect first touch, his shot was blocked by the advancing Kearns.

Galway’s best chance of the game arrived with ten minutes remaining when a deflected shot fell to Paraic Cunningham in the box but Ryan reacted well to smother the shot and retain the lead. Matt KcKevitt was introduced by Barrett in place of Kieran Hanlon and the former Peake Villa man curled an effort wide on the break as the home side pushed forward in search of an equaliser

However, heartbreak ensued when Jack Lynch was penalised for a rash challenge in the air and a floated free-kick delivery caused panic in the Treaty defence before Wilson Waweru fired home from 6 yards out to rescue a point for Galway.