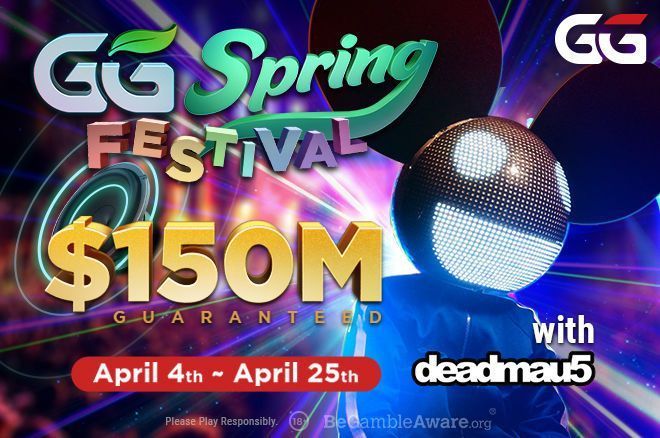 Deadmau5 is more used to producing records than breaking them, but that is exactly what the six-time Grammy Award nominated star will be doing when he teams up with GGPoker.

The festival will run from April 4 through April 25 and is a fun-filled tournament series with a guarantee massive $150,000,000 in prizes over 330+ events. The $150 million surpasses any previous record for prize money for an online poker series.

So where does Deadmau5 fit into the whole GG Spring Festival and how does the tie up work? He will not only be playing in the tournaments, but also playing a set and hosting a houseparty during the two week-long festival.

The opening night will feature an exclusive music set from Deadmau5 streamed live on GGPoker.TV for fans to watch. He will also take part in a $100K Freeroll Houseparty tournament on the same day.

Later in the GG Spring Festival, he will be back as part of the $10K GG Legends Bounty feat. deadmau5 on April 10 with a bounty placed on his head for any players to claim if they knock out the music producer.

“This is going to be the biggest online poker event of all time and will blow a lot of people’s minds,” said Daniel Negreanu, GGPoker Ambassador.

“From the Deadmau5-hosted launch party and other festival elements to the massive headline event guarantees, it’s a true poker party from start to finish, and I can’t wait for it to get underway.”

The entire festival will have a minimum $150 million in prizes, which is the highest series guarantee amount in online poker history. It will not be limited to high-stake players with the 300-plus tournaments featuring a variety of buy-in amounts to attract casual players.

A total of 39 tournaments will carry at least $1 million or higher in prize pools.

If you plan on participating, be sure to use The GGPoker bonus code NEWBONUS which has been launched in conjunction the GG Spring Festival. The current Welcome Bonus available for all new customers is worth up to $600 in bonus.