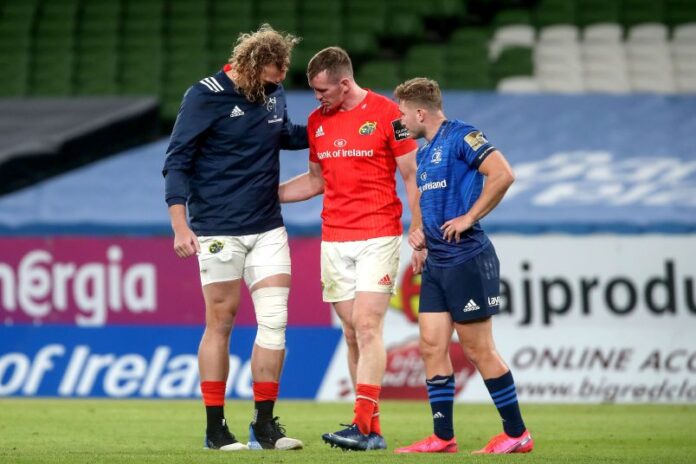 SPRINGBOK superstar second row RG Snyman could be back playing for Munster as soon as next week according to forwards coach Graham Rowntree.

Snyman has been sidelined since August with a cruciate ligament injury but has stepped up training in recent weeks.

The former Blue Bulls is considered as one of the world’s elite forwards and has been a major loss for Munster this season.

However, it now looks like Snyman could feature in the upcoming Rainbow Cup competition to boost the province.

“He’s not got any smaller, that’s for sure,” said Rowntree. “He’s fitting in nicely, he has been in and out doing a few bits of scrummaging, not full eight-on-eight stuff, and contact work with us this week. We’ll progress that.

“A lot of this stuff, we have to see how he reacts to every change of level we put him through.

“He’s getting well managed, looks fit, looks big, looks scary. We’re delighted to have him back in next week, hopefully, for full training.”

Munster take on Leinster this Saturday at the RDS at 19:35. Munster fell to a 16-6 defeat to their provincial rivals last time out on the 27th of March but are hoping to make amends this time around.

The blues are without Johnny Sexton who came off injured against Exeter Chiefs but Munster will be under no illusions about the size of the task at hand. The match will be shown live on Eir Sport 1 and Premier Sport.