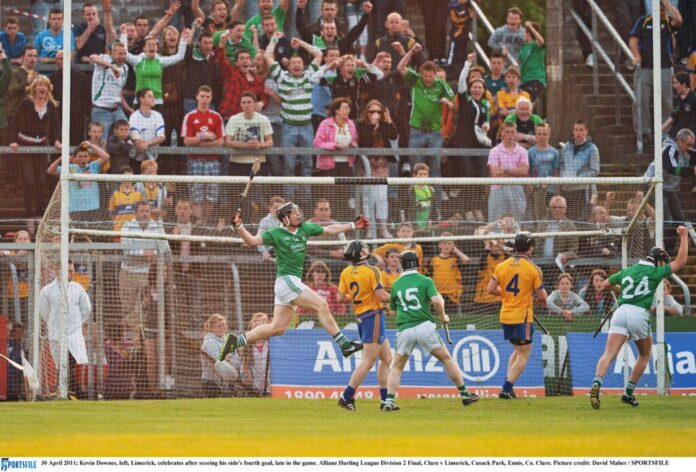 On this day 10 years ago, the Limerick hurlers faced Clare in the Division 2 National League final. Five years previous to that, they faced Kilkenny in the top tier decider.

Limerick earned promotion to the top tier of the League at the first time of trying as they defeated Clare 4-12 to 2-13 in the Division 2 final at Cusack Park.

After a disastrous 2010 that saw them lose every one of their competitive games, Donal O’Grady’s men travelled to Ennis to take on Clare who were appearing in a third successive final.

And the hosts inaccuracy proved costly early on with Limerick hitting just two wides in the first half compared to their opponents tally of eight.

Clare had the first two scores of the game but a lovely run by Richie McCarthy saw him feed Seanie Tobin to bat the ball into the net for Limerick’s first lead of the day early on.

Despite this, Clare hit six of the next eight scores to reestablish the lead. A mix up in the Clare defence saw Donal Tuohy concede an own goal as Limerick retook the advantage approaching the half.

That came in the middle of a spell of 1-3 without reply as Limerick took a four-point advantage into the dressing rooms.

But Clare hit back in the second with three points from John Conlon and a goal from Conor McGrath helping them to move 2-12 to 2-8 clear.

Declan Hannon’s goal on 54 minutes had the gap back to a solitary point and they were level 12 minutes later through Paul Browne.

With the game in the melting pot, a 19-year-old Kevin Downes grabbed Limerick’s fourth of the day with 18-year-old Declan Hannon adding the insurance point to seal Treaty’s promotion.

As things panned out, restructuring of the League saw Limerik confined to Division 1B in 2012, a division they wouldn’t escape until 2018.

Limerick’s nine-year wait for a League title continued as they were beaten 3-11 to 0-14 by Kilkenny in the National League final in Thurles.

Limerick were 0-3 to 0-2 to the good after 10 minutes with Barry Foley in inspired form on his return to the county set up after a three year absence.

Brian Begley responded with an excellent score off JJ Delaney as the sides went score for score in Semple.

And Limerick were level on 33 minutes with Conor Fitzgerald bagging his second of the day.

However, Kilkenny quickly restored their advantage as Henry Shefflin swooped for his first goal of the day. That gave them a 2-4 to 0-7 lead at the break.

The sides traded the opening four scores of the half before Kilkenny opened up a five point lead. But, by the 55th minute, Limerick were back to within two.

The defending champions showed their class and composure to rattle of 1-2 in the space of four minutes to kill off the Limerick resistance.

Joe McKenna’s side battled until the end but there was little they could do to stop Kilkenny winning a fourth title in five years.

The post On This Day: Contrasting League final results for the Hurlers in 2011 & ’06 appeared first on Sporting Limerick.