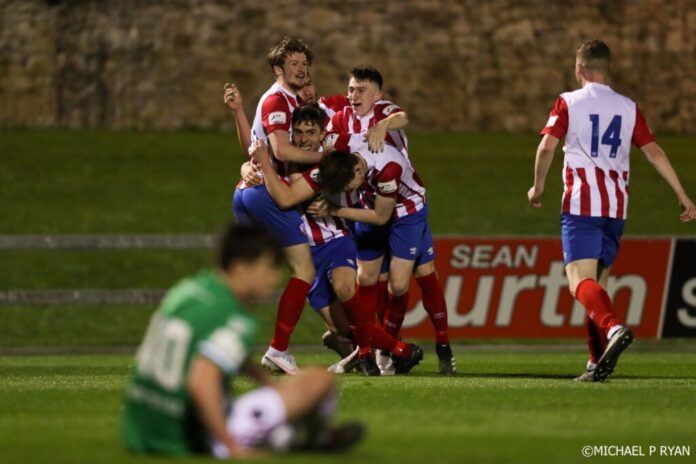 IT was a night of high drama at Tolka Park as three different results were played out from the 90th minute onwards as Treaty United rescued a point with the last kick of the game.

Kieran Hanlon gave the away side the lead in the first half before goals from substitutes Ryan Brennan and Youssef Mahdy turned it around for the home side. Clyde O’Connell scored with the last kick of the game to maintain the unbeaten run but that only begins to tell the story.

Once again, Tommy Barrett’s men were written off by many but there was no doubt that Treaty were the better team in the opening half and were very confident in possession. On numerous occasions, Clyde O’Connell and Sean McSweeney played neat triangles with their full-backs and wingers in what was a very bright start.

On the 10th minute mark, Matt Keane almost grabbed his second goal in consecutive weeks but the upright denied the Kerry man at the back post with Brendan Clarke beaten. Both teams traded chances when Dayle Rooney’s effort was easily collected by Tadgh Ryan and Treaty captain Jack Lynch saw his looping header clear the crossbar.

Approaching the half hour mark, stand-out performer Mark Walsh evaded the challenge of the onrushing JJ Lunney before forcing a finger tip save from Clarke from all of 25 yards. Before the game, we had discussed the importance of the midfield battle and Treaty were in the ascendancy throughout the half.

The goal that the away side deserved arrived in the 37th minute from a very profitable avenue so far this season. Marc Ludden’s free-kick and long throw deliveries have been a huge asset for his teammates and Shelbourne failed to clear his left-footed delivery before the ball fell to Kieran Hanlon who blasted into the net to earn his first goal of the campaign.

The second period was always going to be a tougher proposition with Shelbourne’s squad depth also likely to play a part and so it proved. The introduction of Ryan Brennan and former Limerick FC striker Yoyo Mahdy re-energised Ian Morris’ side and moments later Ryan was forced into a brilliant double save to deny Michael O’Connor and a follow up from Glen McAualey which the home side were adamant had crossed the line.

Shortly afterwards, Treaty almost profited once more from Shelbourne’s inability to clear a set-piece and the ball fell to Keane but Clarke shut down the angle quickly and blocked his effort at the back post.

With 15 minutes remaining, Mark Walsh went down following a fairly innocuous clash with Michael O’Connor but Treaty manager Tommy Barrett was livid that O’Connor received just a booking for an apparent elbow. Walsh has a suspected broken jaw as a result of the incident.

With a recent heartbreaking concession against Galway at the back of their minds, Treaty were beginning to naturally retreat in an attempt to preserve their lead and it looked as though Brian McManus was certain to score for Shelbourne but he somehow contrived to head over the bar unmarked in the penalty area with the whole goal to aim at, much to the relief of the away side.

However, the relief did not last long as in the 90th minute, Lunney’s arrowed free-kick was nodded down by O’Connor to Brennan who was quickest to react and tap home beyond the helpless Ryan. If that wasn’t bad enough, Treaty picked up their fourth red card in six games as Anthony O’Donnell received a second yellow card for bringing down Brennan.

If Treaty thought that was enough bad news for one injury time period, they were wrong. Shelbourne smelled blood and were searching for a winner at this stage. Clarke’s long free-kick delivery was won in the air by the imperious Sean Guerins but Youssef Mahdy reacted quickest the second ball and smashed home what looked like the winner in the 95th minute.

However, resilience, passion and character have been the buzz words when discussing this Treaty team and it was present in abundance once more in the final play of the game as Ludden’s back post delivery was finished superbly by Clyde O’Connell at the back post to send the players, management and small away attendance into raptures.

The result means that Treaty United are still unbeaten following six games and are currently just three points off the top of the table. 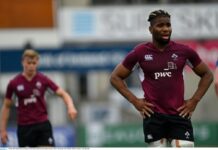