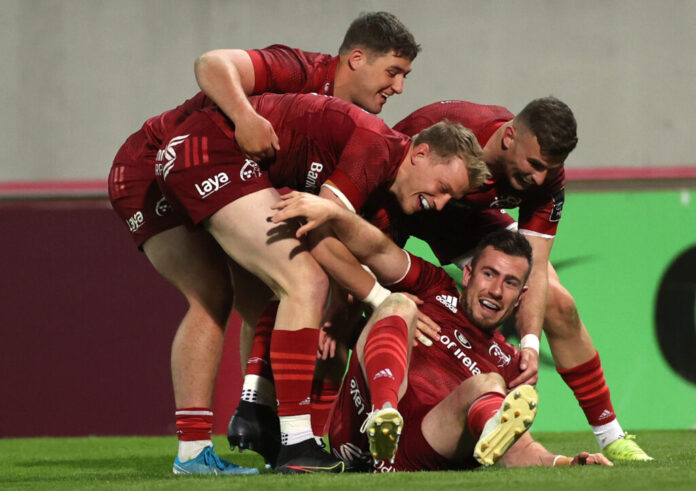 MUNSTER have won their second game in two Rainbow Cup fixtures with a 38-10 hammering of Ulster at Thomond Park.

Tries from Rory Scannell (2), Conor Murray, JJ Hanrahan, Andrew Conway and Man of the Match Mike Haley secured an emphatic win for the men in red.

Rory Scannell and Lion Conor Murray set the tone for the match inside the opening thirty minutes with two well-worked tries.

The new red card rule came into play just before half time as Ulster’s Will Adisson was dismissed in the 39th minute. Ulster were restored to fifteen men twenty minutes later under the new law bu thtat didn’t stop Munster.

Munster capatilaized immediately through fullback Mike Haley and continued to be relenteless from there on in.

Rory Scannell, JJ Hanrahan and Andrew Conway ran in second half tries to cap off an outstanding backs performance from Munster. Aside from a 44th minute try from British and Irish Lion second row Iain Henderson, Ulster had no reply to Munster’s intensity.

In the end, Johann Van Graan’s men ran out as emphatic winners and will hope to continue their hot streak of form for the rest of the Rainbow Cup.

Next up for Munster are Connacht next Friday evening at Thomond Park (6pm ko).