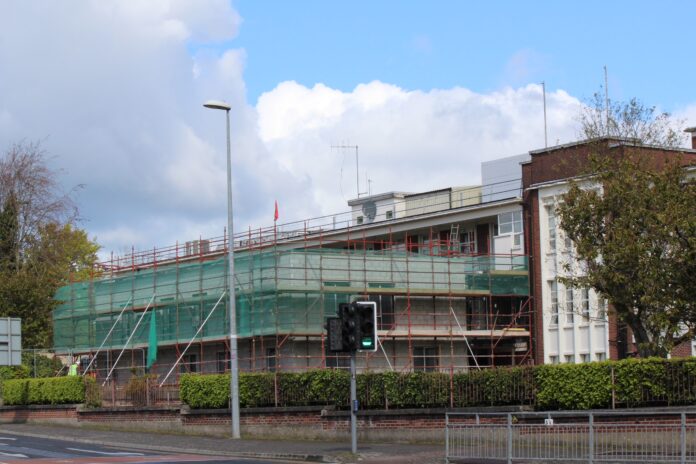 PLANS are underway to offset challenges to providing safe care at the intensive care neonatal unit at University Maternity Hospital Limerick which is 60 years old.

Major construction works have begun at the hospital, which serves the entire mid west region, to extend patient and staff facilities at the neonatal unit, where premature and critically ill newborns are cared for.

The first in a two-phase capital project – to extend and refurbish the existing neonatal facilities which were constructed over 60 years ago – aims to offset “infrastructural limitations which often present challenges to our efforts to deliver safe care to the most premature and critically ill newborn infants,” said a spokesman for the hospital.

“There are 19 cots in our neonatal unit, and capacity has been exceeded at times, requiring transfer of very pre-term infants to other centres.”

Between 600 to 700 premature and seriously ill babies from around the mid west region and sometimes beyond these borders, are cared for annually at the Limerick neonatal unit.

Welcoming the development, Limerick father, Ger Thompson, whose daughter Elliana (9) and later his step-twins, Ryan and Megan (16), were patients at the Limerick neo natal unit fallowing their premature births, said: “This is something that is really long overdue and badly needed, considering Limerick services newborns from Cork, Tipperary, Clare and Limerick.”

Thompson, who has raised thousands for premature baby services, said the unit’s staff are “superheroes” who work in a very challenging environment: “When its full in the unit, you are either going to Dublin or to Cork, and that’s a big struggle for parents if you have to arrange transport and accommodation on top of a stressful situation.”

A hospital spokesman said the “project’s first phase involves the building a two-storey extension to accommodate staff and parents’ facilities currently located in the existing neonatal unit, creating the opportunity to refurbish and expand cot spaces, which is Phase 2 of the project”.

Aisling O’Brien, O’Brien Builder’s & Civil Engineering Construction Ltd, Milltown Malbay, who is managing the construction of the project’s first phase said she hoped this would be completed by the end of July, subject to various conditions.

The first phase will include a “staff unit, administration and staff changing rooms, an on-call room, a parents room, and a lactation room”, said Ms O’Brien.

“We are phase one and we will make allowances for space to be freed within the neo natal ward to allow that to be upgraded,” she added.

“I’m delighted to be involved, especially being a woman in a male dominated (construction industry), to be managing a Maternity building where it is women one is helping, so I’m happy to be here.”

“I have friends who have had children here and they have nothing but praise for the staff on the Neo Natal ward, they reckon they are just unbelievable.”