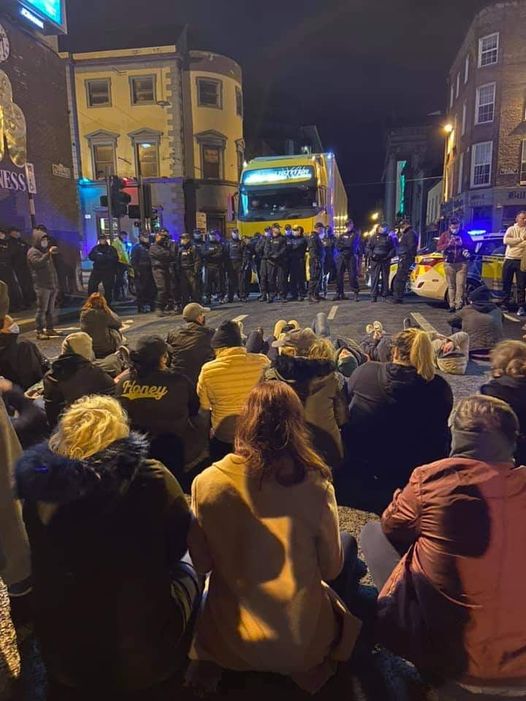 A bid by liquidators to have stock removed from the former Debenhams store in Limerick city failed last night, after around 100 ex-Debenhams staff and supporters continued to stage a peaceful sit-down protest at the premises over their claim for redundancy from the ailing company.

Gardaí erected a ring of security steel fencing along streets and pavements approaching entrance points to the building, which is wrapped around by Sarsfield Street, O’Connell Street, Honan’s Quay, Liddy Street.

A large number of uniformed gardaí kept a watching brief as members of the Garda Public Order Unit forcibly removed protestors away from entrance gates to the building’s delivery depot, however protestors then laid down on the road to stop trucks entering the site.

Ex-Debenhams staff have been picketing outside the building for the past 400 days, conducting a blockade at entry points to try to prevent liquidators from removing stock, as an attempt at leverage behind their demand for fair compensation.

Without warning, Debenhams closed its 11 Irish stores in April last year amid the first Covid lockdown, resulting in the loss of around 2,000 jobs.

The ex-workers, who have received only their statutory entitlements from their social insurance, claim they were laid off by email, with no notice and no redundancy after decades of service in many cases.

They claim the UK-based retailer broke the terms of a 2016 agreement to pay workers two weeks’ statutory redundancy plus two weeks ex-gratia, per year of service, in the event of redundancy.

“At around midnight Gardaí started to block off the roads approaching Debenhams, including access to O’Connell Street and Liddy Street. Workers refused to move when instructed and dozens of Gardaí from the Public Order Unit were used to remove workers one by one,” said a spokesperson for the Solidarity party.

“However, when the first truck approached the junction of William St and Henry St and attempted to gain access to the entrances to the loading bay, workers and supporters lay down in front of it. After another stand off between approximately 100 workers and supporters and 70 Gardaí, the trucks eventually retreated, and as Gardaí started to pack up crash barriers to leave the demonstrators sang ‘Limerick, You’re A Lady’ in celebration.”

James Tuohy of the Socialist Party said those involved would continue to stand united against attempts to have stock removed from the building until firmer workers got a fair compensation.

“The Debenhams workers have been an inspiration. It’s day 412 of the strike, and they have gone toe to toe with the repressive arm of the State and won. It’s a signal to any other workers facing a similar situation, that if they (stand up) they can win,” Mr Tuohy said.

He said the ex-Debenhams workers have been “an utter inspiration” and put the leaders of workers unions “to shame”. “If the massed ranks of the labour movement had followed the lead given by these workers, there’s no way that we’d still be here now.”

“This is a fight all workers facing liquidation situations have a stake in and the lack of fight shown by the trade unions has been a dereliction of duty,” he claimed.

“Whatever the outcome of this struggle, a balance sheet will be drawn and it’s important that the right lessons are learned. If we (stand up), we can win. If we don’t, we definitely won’t. That’s the lesson from tonight,” Mr Tuohy added.

Meanwhile, Limerick Sinn Féin TD, Maurice Quinlivan, has questioned what he called “the massive use of Garda resources” in support of KPMG efforts to remove stock from the former Debenhams store in Limerick last night.

“One must question if this was a worthy use of limited Garda resources. Last night we witnessed the deployment of up to 50 Garda personnel in support of KPMG stock removal efforts in Limerick. For many in Limerick it will come as a surprise that there were so many Gardaí on duty,” said Deputy Quinlivan.

“Too often when members of the public or myself call the local Garda stations, the refrain heard is that that ‘there is no car available.’ However, when big business call it seems that there was no lack of resources made available to them by the state,” he claimed.

“An Garda Síochána attended a premises on O’Connell Street, Limerick as required in the execution of a High Court Order on 18TH May 2021,” said a Garda spokesman.

“An Garda Síochána has no further comment at this time,” they added.