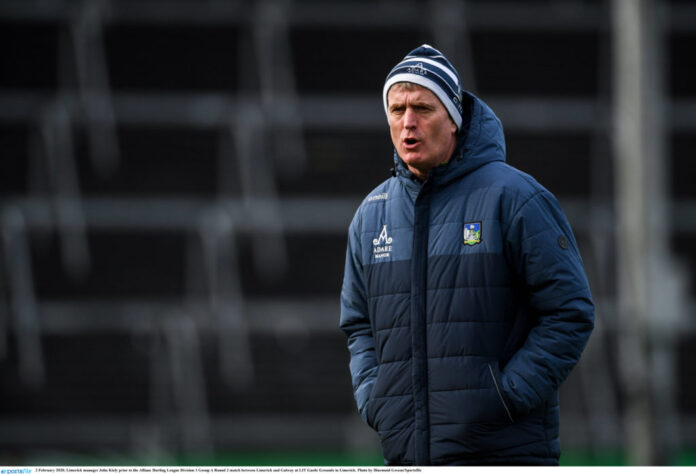 LIMERICK Senior Hurling manager John Kiely has issued an apology for his post match comments after their loss to Galway in the National League on Sunday.

In an exclusive with the Examiner, Kiely said,

In the wake of the game, Kiely gave an impassioned speech where he criticised Galway for simulation, something he now wishes to retract after viewing the game in hindsight, highlighting his good relationship with Galway over the years.

“I should have paid more attention to my own performance and that of the team than to the opposition.

“At the time I was of the opinion that I had seen an incident that I wasn’t happy with: It was late in the game and very much to the forefront of my thoughts after the game.

“But over the last two days, I’ve been going through the video footage of the game and have had a very clear sight of those incidents I referred to. The bottom line is that what I thought I had seen was absolutely not the case.

“We’ve had a fantastic relationship with the Galway players and management over the last number of years. We’ve had some fantastic battles, and I’ve known their current management team, Shane O’Neill and John Fitzgerald, for a long time and have tremendous respect for them. I want to apologise to them for any insinuation that might have been inferred from my comments last Sunday.

“In the past the Galway team and management showed tremendous grace and dignity when we’ve met them. They showed that in 2018 and again last year, and that was the least I owed them after they beat us on Sunday.

“They were far better than us on the day last Sunday in every facet of the game and fully deserved their victory, and I should have dwelt on that aspect of the game afterwards, instead of focusing on what I felt was simulation. In doing so I fell far short of the standards I set myself.

“It’s important when we make a mistake that we have the wherewithal to put our hands up and say, ‘listen, I got that one wrong’ and learn from it and move on.

“Hopefully over the last four years, I haven’t made that many mistakes, but those comments on Sunday were certainly not accurate or fair and I am very happy to correct the record and apologise.”

Nonetheless, the two time All-Ireland winning manager still believes there are concerns in the game with the ever increasing number of frees being awarded.

In the first two games of the League, Limerick have conceded 0-27 from frees, with Kiely concerned about the interpretation of the new rules and the lack of physicality in the game.

“Players and managements are struggling with the situation at the moment, but I believe we can come to a resolution on this with better communication and better interaction with officials in Croke Park.

“I think we can work on this and come up with solutions that will work for the year ahead, but it’s a work in progress.”

Limerick travel to Walsh Park this Sunday looking for their first win of the season against Waterford in a rematch of December’s All-Ireland final.

The post John Kiely “happy to correct the record and apologise” after simulation comments appeared first on Sporting Limerick.