The annual fundraising event, Hospice Sunflower Days has been cancelled for the second year in a row due to government enforced restrictions and has moved to an online platform in the form of a virtual remembrance garden.

The National Hospice Movement provides fundraising support for 26 independent hospices across Ireland including Milford Care Centre, located in Limerick. Milford Hospice, which provides hospice services to Ireland’s Mid West region, receives approximately 75% of it’s funding from the HSE and relies solely on donations through fundraising to make up the remaining 15% of it’s required budget.

Anne Marie Hayes, head of fundraising at Milford Care Centre said  “All the services that we provide in the community and in the inpatient unit are partly funded by the HSE. And then the remainder I have to make up through fundraising events in the year. So my target could be up to €1.2 million per year. And that’s to keep the services going. And it’s so important that we provide service because you know, it’s what families need, as time and as an hour of their needs.”

Hayes said  “ The world changed then from March onwards, and we had to enter the new world of everything becoming virtual. So we had virtual coffee morning, then we had sunflower days and that became virtual. Then Light Up a Memory of Christmas time was a virtual campaign as well. So then, in January of this year, we thought all will be back somewhat normal in some shape and form. But that wasn’t to be because no mass gatherings were allowed and so forth.”

Hospice Sunflower Days, now celebrating it’s 31st year,  is a national campaign promoted by hospices all across Ireland. The project promotes the message that every euro raised locally stays local. In normal years, Milford hospice could hope to raise funds in the region of €780,000 across the national campaign from it’s street campaigning. However, given the restrictions placed on public gatherings the centre has faced setbacks in their fundraising and are asking the public for their support.

Milford spokesperson, Anne Marie Hayes said “We’re appealing to everyone if they could choose Milford hospice, and, you know, sponsor the sunflower, it would be truly hugely painful.”

We want to provide the support, we want to develop the services here. And we can only do this with the support of doing fundraising campaigns, like sunflower days.”

“People can log on to sunflower days online and they can dedicate a sunflower, in memory of their loved one and It’s great, because you’re supporting the services of Milford hospice.” she said.

Milford Hospice, which caters to people of Clare, Limerick and North Tipperary, provides palliative care to individuals facing life threatening illness through both in-hospice care and home visits. The money fundraised through the national campaign is used to support the services that Milford provides for people in it’s care from therapy services, music, and the horticulture garden.

“Bottom line is, where will we be without the support of families in the community. I mean, they’re amazing. They go out they arrange fundraising events – They say you looked after a loved one or a friend or a family member belonging to me. And we’re always thankful for that. And they will always throw two euros or three, or whatever the amount is. And you know, we never lose sight of the support that we receive from families, it’s just amazing. People are just amazing to us. And we will never lose sight of that.”

To support the cause, individuals can log onto sunflweordays.ie where they will be prompted to sponsor a sunflower in the remembrance garden and given the option to support a hospice of their choosing. The campaigns new platform means that no matter where you are in the world, you can partake in Hospice Sunflower Days by simply logging on and sponsoring a sunflower at https://sunflowerdays.togetherforhospice.ie/donation/ 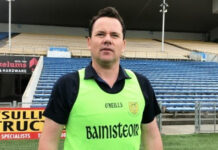