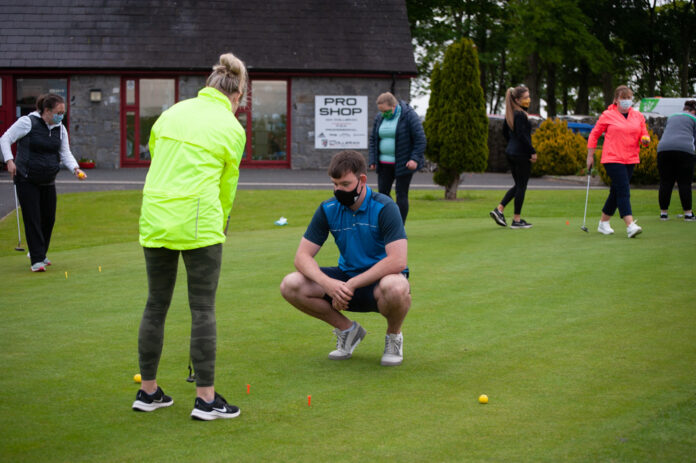 IN the past week, a significant milestone was reached regarding gender equality within one of Ireland’s most prestigious golf courses.

The managing committee of Dublin’s Portmarnock Golf Club voted to drop its ‘Men-Only’ rule and allow women members for the first time in the club’s 126 year history.

A programme that somewhat mirrors this significant decision within the realm of Irish golf, is perhaps a more proactive attempt at establishing gender equality, at perhaps a relatively less esteemed golf club.

Newcastle West Golf Club, situated in the village of Ardagh in county Limerick, launched it’s Ladies Induction to Golf Programme. The programme was devised to facilitate the equipment, premises and instruction for ladies of all ages to have a clear and structured introduction to the game of golf.

Darragh Morrissey, who is an assistant PGA pro at Newcastle West Golf Club and one of the brains behind the programme explained, “Although we have always welcomed lady members, the majority of our existing members and our new members are men.”

As the preponderance of Newcastle West Golf Club’s members unintentionally resulted in being male, it outlined a discrepancy within the systems of how individuals enter the game.

Male young adult and junior members seemed to seek membership for a variety of different reasons and had the resources to become involved within both the club and sport very quickly.

As Darragh Morrissey outlined, “Lots of young boys come out and play a few holes with their dad or grandad, and they get into the game that way. With that experience they’d have a good idea of rules and etiquette as well as the use of their dad’s old clubs” However, the ritual of fathers passing their knowledge of golf to their sons, was rarely shared with their daughters.

The now fully booked introduction programme is due to get underway at Newcastle West Golf Club this week. The program as a whole will run for eight weeks and will begin with a number of ‘taster’ sessions, where newcomers will be introduced to the core components of a game of golf. For example, driving, iron play and putting.

At the end of the eight week programme, it’s graduates will be able to avail of membership at a significantly reduced rate, as well as credit that can be put towards the purchase of clubs and attire.

Thanks to the growing support and success of Ireland’s Leona Maguire and the LPGA, in conjunction with countless social media campaigns like Titlest’s #WomensGolfDay, golf in Ireland and the lifestyle that comes with it is only becoming more attractive to women seeking challenge and competition.

Yet to the surprise of many, it’s a widely unknown and unrated Limerick club that has perfected the portal for women with no current involvement in the game to become active and ambitious members.